After Protests Over Gang-Rape In Madhya Pradesh, Politics Takes Over

Mandsaur Gang-Rape: The young girl, a Class 2 student, was standing outside her school on Tuesday, waiting for her parents to pick her up outside when she was lured away by the two men. They raped her, tortured her and then slit her throat before walking away. 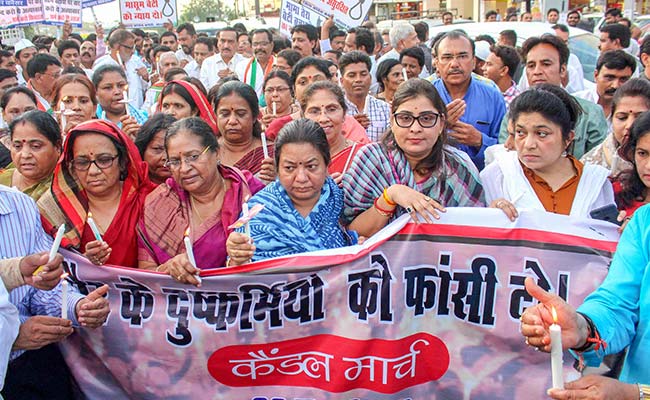 Mandsaur Rape: Thousands of people took to the streets protesting the rape of a 7-year-old girl (PTI)

After spontaneous protests erupted in parts of Madhya Pradesh to seek death penalty for the men who brutalised a seven-year-old girl in Mandsaur, political parties moved in on Saturday. The Congress launched a blistering attack at the Shivraj Singh Chouhan government for doing "absolutely nothing" for the safety of women and demanded the probe be handed over to the CBI.

A political row also erupted over BJP lawmaker Sudarshan Gupta telling the girl's parents to "say thank you" to a BJP leader for calling on them. A video clip that captured Mr Gupta's advice to the parents has been circulated widely, triggering a sharp reaction against the ruling party lawmaker.

"In terms of insensitivity, the incident has reached its peak when a BJP MLA from Indore introduces the MP of Mandsaur to the parents of the victim and says how they should feel glad that he has paid them a visit," Congress' Priyanka Chaturvedi said.

The legislator, who has been badgered by the opposition, has since then claimed that his comments were misconstrued but given an unqualified apology.

Jyotiraditya Scindia, the Congress leader who heads the party's campaign committee for the assembly elections later this year said, "I am requesting for the CBI probe because the reasons behind this case need attention". He held Chief Minister Shivraj Singh Chouhan and the BJP, which has been in power for 15 years, responsible for the horrific rapes in Mandsaur and elsewhere.

The young girl, a Class 2 student, was standing outside her school on Tuesday, waiting for her parents to pick her up outside when she was lured away by the two men, Irfan and Asif. They raped her, tortured her and then slit her throat before walking away, leaving her to die.

The girl, found brutalised some 700 metres from her school, did survive. But she is still battling for life.

But as word about her injuries spread, thousands of people came on the streets in Mandsaur this week to demand that the police hand over the accused to them for instant justice.

Mandsaur's top police officer Manoj Singh told Reuters that investigators are just waiting to speak with the seven-year-old girl once before filing formal charges in court.

Asked why the Congress wanted the case to go to the CBI when the police had made the arrests, Mr Scindia said he was just saying that "action should be taken as soon as possible".

Chief Minister Shivraj Singh Chouhan said the accused should be sent to the gallows and deserved no mercy. He has ordered the police to quickly file charges against the accused and send the case to a fast track court.

The back-and-forth was much bitter on social media.

MP has legislated death penalty for child rapists. So Irfan and Asif will meet their rightful fate but India hasn’t forgotten how you and your party went silent when Centre amended law to introduce death penalty for rape of minors below 12years. Rape is a political tool for you! https://t.co/uSN4AUc3hC

After Rahul Gandhi tweeted that the brutality the girl was subjected to, sickened him, the BJP's Amit Malviya hit out, saying the Congress had used the crime as a "political tool".

He also countered a Congress tweet that said a female was raped every 15 minutes.

This translates into 35,000 rapes annually, which is closer to the total rapes in the entire country, Mr Malviya added.