Delhi Zoo: Rehan Khan, a 28-year-old man from Bihar, was able to climb over the high metal grille surrounding the enclosure.

A man who jumped into a lion's enclosure at the Delhi Zoo on Thursday spent several moments perilously close to the beast before being rescued. Zoo officials described him as an unstable man.

Rehan Khan, a 28-year-old man from Bihar, was able to climb over the high metal grille surrounding the enclosure even though guards tried to stop him, officials said. He reportedly kept saying he did not want to be rescued.

Chilling visuals show the man facing the Asiatic lion, trying to engage it and even casually lying down at one point. He appears to be undaunted by the giant carnivore and even looks like he is trying to provoke it. "We all rushed to the spot, gave him a ladder but he did not listen. Then we tranquilised the lion and rescued him," said Riyaz Ahmed Khan, spokesperson of the zoo. Khan was taken to a police station.

"He seems to be mentally unstable. He was immediately brought out without any injury," said a senior police officer. 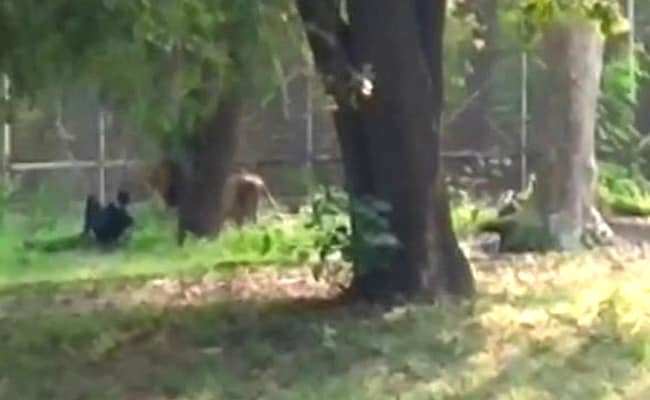 The man is even seen casually lying down in front of the lion at one point.

Experts said the intruder was "extremely lucky" to have survived the encounter unharmed. "A lion of this size can kill a human being within 15 seconds," said Anish Andheria of the Wildlife Conservation Trust.

He guessed that eventually, had the guards not acted when they did, the lion would have gone for the man.

Animal Rights activist Gauri Maulekhi questioned the security in the Delhi Zoo. "Even a few months back the lions' enclosure had been breached as there were no proper locks," she said. "Even if it is deliberate, surely the fencing is not high enough, so people are able to enter? There should be absolutely no scope of such incidents," added the activist.