Arif, a watchman, set out on the daunting journey hoping some miracle would happen and he would be able to see his father, who had suffered a "massive stroke" and was in critical condition. 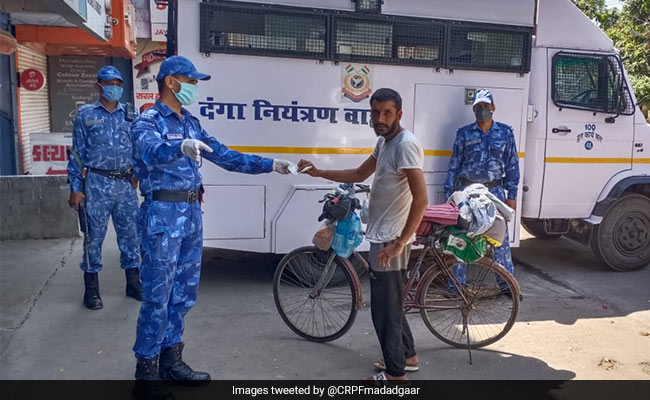 The helpline immediately got into action, called up Arif and got logistics arranged.

With the country in a lockdown situation due to the coronavirus pandemic, 30-year-old Arif had only one way to meet his ailing father: cycle 2100 km from Mumbai to Jammu's Rajouri district, where the 60-year-old lives in a remote village along the Line of Control.

Arif, a watchman, set out on the daunting journey hoping some miracle would happen and he would be able to see his father, who had suffered a "massive stroke" and was in critical condition.

And miracle did happen, when the CRPF came to his help. The paramilitary force gave him and his father ''wings'', quite literally.

Arif's father Wazir Hussain was on Sunday airlifted from the Panjgrain village on a special chopper after the CRPF's Kashmir-based ''madadgaar'' helpline came into action.

On April 1, a week after the 21-day lockdown began, Arif came to know that his father had suffered the "massive stroke".

The man, who is employed as a watchman in the financial capital of the country, found that there was no mode of transport that could take him to his village along the India-Pakistan LoC.

The next day, he decided to cover the huge distance on his bicycle.

"The madadgaar was informed by a media outlet about Arif's journey. The helpline immediately got into action, called up Arif and got logistics arranged through CRPF establishments spread across five states. On Sunday, he was provided with lunch, Rs 2,000 cash, sanitiser, masks and some dry fruits at Vadodara in Gujarat."

"We asked him to stay out at our base due to the lockdown restrictions with an assurance that we will take care of his father," CRPF Special Director General (JK zone) Zulfiquar Hasan told PTI.

Arif, however, insisted he wanted to meet his father.

"So, we then arranged him to travel in a truck, with the help of the Gujarat Police, carrying essential items," General Hasan said.

"The truck will drop him near Jodhpur in Rajasthan by Monday noon and we will further arrange his travel," he said.

In the meantime, the IPS officer said, a special chopper was sent to Rajouri from where his father was airlifted and admitted to a government medical college in Jammu.

The ''madagaar, another official said, had initially got Arif's father admitted to the Rajouri district hospital with the help of its troops posted about 15 km from his village, but as he required better medical care, it was decided to shift him quickly to Jammu.

"The madadgaar will do whatever it takes to help more such Arif's in the future too," General Hasan said.

The helpline also posted the endeavour on its official Twitter handle saying "for any assistance 24X7 call @CRPFmadadgaar on 14411."