Man In Jaipur Police's Kiki Challenge Tweet Is Alive. He Lives In Kochi

The post went viral within hours and got Jawahar Subhash Chandra's family and friends worried. Frantic calls and messages followed 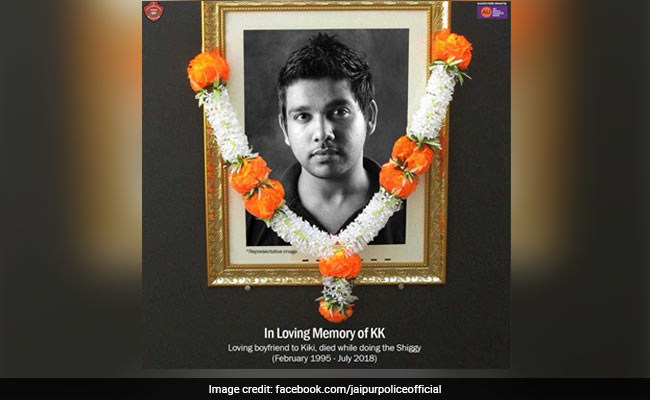 The young man in a garlanded photograph of a "victim" of the Kiki challenge shared by the Jaipur Police to dissuade others from attempting the dangerous stunt is alive. And the hatke idea of the police has turned out to be a nightmare for Kochi-based Jawahar Subhash Chandra, the man in the photograph.

In a Facebook post, the Jaipur Police had asked people not to accept the risky challenge. "Don't challenge death. Be wise - keep away from silly stunts & advise your friends as well to stay safe," it read. The image accompanying the post said, "In loving memory of KK - Loving boyfriend of Kiki, died while doing the Shiggy."

The post went viral within hours and got Mr Chandra's family and friends worried. Frantic calls and messages followed.

It turns out that the 30-year-old man had taken up some modelling assignment many years ago and the Jaipur Police bought his photograph from a website.

The newest trend on social media, which involves jumping out of a slow-moving car and dancing alongside, the Kiki challenge has been inspired by singer Drake's latest hit "In My Feeling". Also known as the In My Feelings challenge or "doing the Shiggy", thanks to comedian Shiggy who posted a video dancing to the song, this dangerous trend has naturally led to a lot of warnings against it.

Some videos of the challenge, uploaded on the internet, show oblivious dancers crashing into poles, tripping on potholes and even falling out of cars.

One video shows a dancing woman's handbag being stolen. Another shows a man getting hit by a car.

The Delhi Police urge on Twitter, "Dance on the floors, not on the roads! #KikiChallenge is not worth the fun. #InMyFeelings Keep #Delhi roads safe for all".

The Uttar Pradesh Police shared a video showing what happens if the challenge goes wrong. "Dear Parents, whether Kiki loves your child or not, we are sure you do! So please stand by your kids in all the challenges in life except #kikichallenge," they tweeted.

The Mumbai Police had earlier posted a video on Twitter with a warning, "Not just a risk for you but your act can put life of others at risk too. Desist from public nuisance or face the music!"