Man Breaks Security To Meet Priyanka Gandhi In UP. Watch Her Reaction 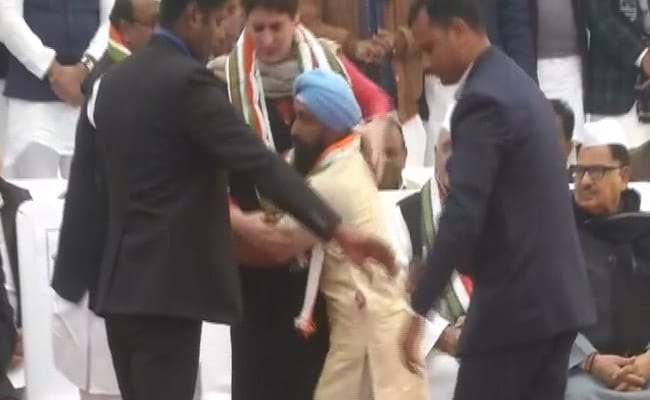 Congress leader Priyanka Gandhi was attending an event in Lucknow today to mark the Congress's 135th foundation day when a man breached security and ran towards her. She was sitting with Salman Khurshid and other party colleagues when this man - apparently a party supporter - insisted that he wanted to meet her. Without losing calm, Ms Gandhi chose to hear him out.

In a video tweeted by news agency ANI, the 47-year-old leader is seen at the event when the man - wearing a blue turban - suddenly runs towards her. When party workers and her guards try to stop him, Ms Gandhi gets up from her chair and tells them that she would talk to him.

She speaks to the man and shakes hands with him. She sits down again, breaks into a smile as the enthusiastic party supporter continues to speak.

#WATCH Man breaches security of Priyanka Gandhi Vadra at a party event in Lucknow on Congress foundation day, gets to meet her. pic.twitter.com/v4UtwedMF2

Seemingly satisfied after he is heard, he greets all the Congress leaders around before leaving.

The incident comes weeks after security personnel at the Congress leader's home in central Delhi's Lodhi Estate let a family of five drive in through its gates because they believed that the car belonged to her brother Rahul Gandhi.

Meerut resident Chandrashekhar Tyagi - who claimed that he was associated with the Congress in Meerut - and his family had come in a Tata Safari car similar to that of the former Congress chief, who was expected around that time. His mother, Sharda Tyagi, said the family decided to call on Priyanka Gandhi because they were distraught over the downgrading of her security.

Priyanka Gandhi was provided security by the elite Special Protection Group (SPG) until the central government downgraded it to Z-Plus last month. Under the revised arrangement, she is protected by a large team of the Central Reserve Police Force (CRPF) instead.