The shoe "attack" took place on Monday evening in Vadodara district when Nitin Patel was addressing the media after a bypoll rally. 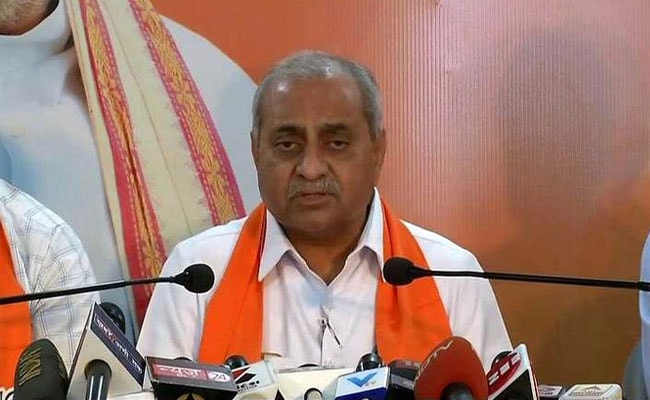 Gujarat Police on Wednesday arrested a man, who they claimed was a "Congress worker", for hurling a shoe in the direction of Deputy Chief Minister Nitin Patel in Vadodara district two days ago.

The shoe "attack" took place on Monday evening in Vadodara district when Nitin Patel was addressing the media after a bypoll rally.

The footwear missed the minister and landed just a few inches away from Nitin Patel.

According to the Vadodara district police, the accused, Rashmin Patel, is a resident of Shinor taluka of the district and is a Congress worker.

However, the Congress has rejected the police claim and said Rashmin Patel is a BJP worker.

"Based on a specific tip-off, we have arrested one Rashmin Patel, a Congress worker, for his involvement in the case.

"In an audio clip found in his mobile phone, he can be heard saying his 'plan remains successful'. We are investigating whether others were involved in the incident," Superintendent of Police Sudhir Desai told reporters in Vadodara.

Refuting the police claim, state Congress spokesperson Manish Doshi shared documents with the media, claiming that Rashmin Patel is in fact a BJP worker and belongs to a dissident group.

"Police must remain neutral and refrain from functioning as BJP workers. Rashmin Patel is a BJP worker and belongs to a dissident group. The shoe was hurled because of BJP's internal groupism," added Mr Doshi.

The ruling BJP, however, refuted the Congress claim, saying Rashmin Patel was with the Congress and even took part in canvassing for the opposition party's candidate from the Karjan assembly seat, Akshay Patel.

"Rashmin Patel is not with the BJP. He was a Congress worker and worked for Akshay Patel ahead of the 2017 Assembly polls when he contested as a Congress candidate. Even Akshay Patel knows him," said BJP leader Satish Patel.

Karjan is one of the eight Assembly seats going to bypolls on November 3.

The by-elections were necessitated following the resignations of Congress MLAs, including Akshay Patel.

Akshay Patel had won from Karjan in 2017 on a Congress ticket. The BJP has fielded him from the same seat after he switched sides.