Rahul Singh in a police complaint alleged he had given the money to Mr Som for a partnership in a brick-kiln. 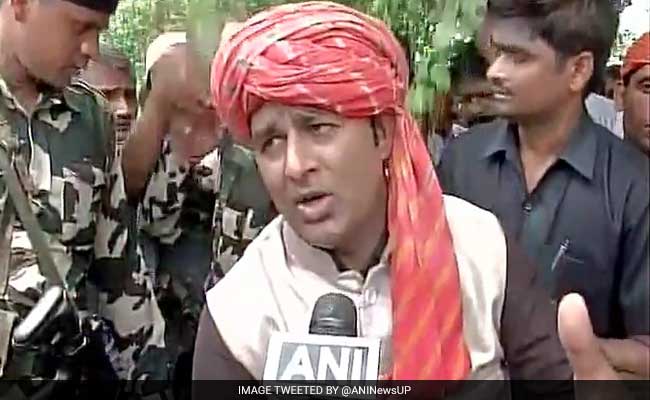 The complainant claimed that he had arranged the money by selling his buffaloes. (File)

Meerut: A man in Meerut has alleged that BJP MLA Sangeet Som has duped him of Rs 53 lakh, a charge the lawmaker has denied, saying "it was being done under a conspiracy by some local SP leaders".

Rahul Singh, a resident of Rajpur Momin, in a complaint to the additional director general of police (Meerut Zone) alleged that he had given the money to Mr Som for a partnership in a brick-kiln.

However, official documentation for the transaction and partnership was not completed by Som and thus, he "duped me of Rs 53 lakh", Singh alleged yesterday.

The complainant claimed that he had arranged the money by selling his buffaloes and taking a bank loan by mortgaging his farm land.

"If action is not taken in a day or two," Rahul Singh said his family would petition Uttar Pradesh Chief Minister Yogi Adityanath. He has also threatened that they would commit suicide, if they do not get "justice" there also.

Sangeet Som, however, said, "This is a conspiracy by local Samajwadi Party (SP) leaders. Whenever there are talks of me becoming a minister, such misinformation is peddled against me by rival leaders."

"Few days ago, the man had levelled the same allegation against me, when there was talk that I would become a minister. The same has happened this time too. He reaches local media houses with the same complaint. He has been after me for a very long time," the MLA said.

Promoted
Listen to the latest songs, only on JioSaavn.com
The Sardhana legislator said, "I have nothing to do in this case."

Rahul Singh had submitted his complaint to Additional Director General of Police (ADGP), Meerut Zone, Prashant Kumar, yesterday. "I had to meet the ADGP after the SSP did not accept my complaint. The SSP sent me to the office of SP (Rural). There, too, my complaint was not addressed," he claimed.