"We have to take on BJP aggressively and together," sources quoted Mamata Banerjee as saying at the meeting. "The BJP is targeting us personally and we all need to fight back together," she also reportedly told Aaditya Thackeray. 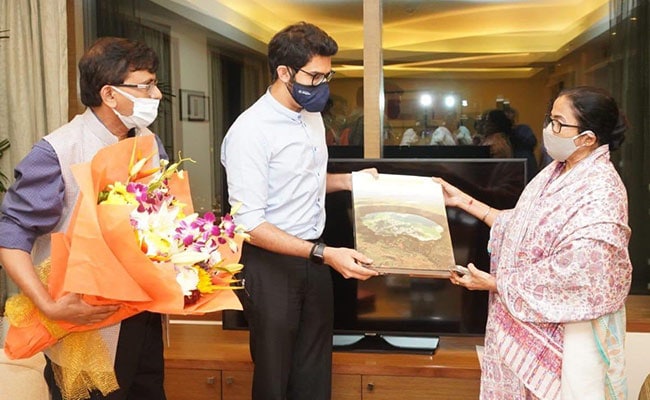 Bengal Chief Minister Mamata Banerjee -- on a tour to strengthen the opposition network in the country ahead of the 2024 general elections -- met Maharashtra minister Aaditya Thackeray and senior Shiv Sena leader Sanjay Raut Tuesday evening. The future of opposition and ways to challenge the BJP in 2024 were canvassed at the meeting, a source close to Mamata Banerjee said.

Ms Banerjee described Aaditya Thackeray as a future national leader and someone who can do good things for the nation, sources close to her said.

"We have to take on BJP aggressively and together," sources quoted Ms Banerjee as saying at the meeting. "The BJP is targeting us personally and we all need to fight back together," she also reportedly told Aaditya Thackeray.

Their two parties, despite ideological differences, were on the same page on several key issues, she remarked.

This evening, @rautsanjay61 ji and I called on West Bengal CM @MamataOfficial didi, during her visit to Maharashtra. The bond between CM Uddhav Thackeray ji and CM Mamata Didi is strong.
Discussed various things including working together for tourism for our States. pic.twitter.com/S37OVjbpRE

Ms Banerjee -- who is on a two-day visit Mumbai to meet industrialists -- is also scheduled to meet Nationalist Congress Party chief Sharad Pawar, one of the key interlocutors of the opposition.

She also wanted to visit Chief Minister Uddhav Thackeray, but he is recuperating from a surgery and is being kept in isolation.

"Uddhav Thackeray's son Aaditya will come to meet me at the hotel where I will be staying," she was quoted as saying before leaving Kolkata earlier this evening by news agency Press Trust of India.

Ms Banerjee has had several meetings with the Sena chief and his son earlier. Their first meeting took place long before the political realignment that saw the Sena put an end to its 35-year alliance with the BJP and tie up with the Congress and Sharad Pawar.

Thackeray Senior was full of praises for Ms Banerjee after her victory in the April-May assembly elections in Bengal.

Mr Thackeray, who earlier called her a "Bengal tigress" for ending the Communist rule in the state, said she had "single-handedly" overcome the BJP challenge in the recent assembly elections.

The Trinamool chief, whose party is on an expansion mode -- mostly at the cost of the Congress -- is simultaneously moving towards the national platform.