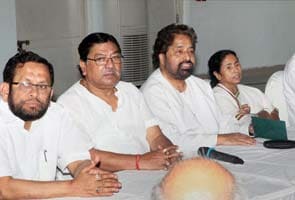 New Delhi: At about 4 pm today, when Mamata Banerjee's ministers meet Prime Minister Manmohan Singh in New Delhi to hand over resignation letters, the Congress' six ministers in the West Bengal government were hoping to resign in Kolkata. However Ms Banerjee has given time till tomorrow 5 pm to these ministers for the submission of their resignation letters. This will complete the severing of ties between the Trinamool Congress and the Congress.

Congress ministers had begun to skip cabinet meetings ever since Ms Banerjee announced that she was pulling out of the UPA government at the Centre. The Trinamool-Congress relationship in West Bengal has not been an easy one and was so far held together tenuously only by the tie-up at the Centre. The two parties have clashed incessantly in West Bengal going public with attacks on each other.

Promoted
Listen to the latest songs, only on JioSaavn.com
In West Bengal, Mamata Banerjee has majority on her own with 184 seats and does not need the Congress' support. The Left only has 40 seats and the Congress with 60 will now become the principle opposition party in the state. With the Congress sitting in the opposition hereafter and contesting elections like the panchayat polls on its own, some splitting of votes is expected. The Trinamool and Congress had a pre-poll allaince in West Bengal.