Phase II will be centered around the INS Vikramaditya Carrier Battle Group and the USS Nimitz Carrier Strike Group. 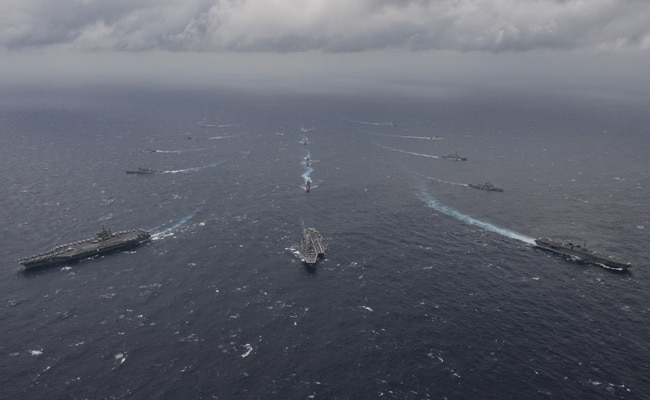 The Australian, Indian, Japanese, and US navies will take part in the exercise on November 17-20.

The Vikramaditya Carrier Battle Group of the Indian Navy and the Nimitz Carrier Strike Group of the US Navy will lead phase II of the annual naval exercise Malabar 2020 which will be held in the northern Arabian Sea on November 17-20.

Phase II of Malabar 2020, in which the navies of Australia, India, Japan, and the US are taking part, will involve operations of increasing complexity, building on the synergies achieved in phase I, a government release said today.

The first phase, held in the Bay of Bengal on November 3-6, focused on complex and advanced naval exercises, including surface, anti-submarine, and anti-air warfare operations, besides seamanship evolutions and weapon-firing exercises.

In this next phase, the release said, the two carrier battle groups will engage in high-intensity operations over four days, involving cross-deck flying and advance air defence exercises by the MIG 29K and F-18 fighters and E2C Hawkeyes.

Indigenous destroyers, INS Kolkata and INS Chennai, stealth frigate INS Talwar, Fleet Support Ship INS Deepak, and integral helicopters will also participate in the exercise, led by Rear Admiral Krishna Swaminathan, Flag Officer Commanding Western Fleet. From the US side, cruiser USS Princeton and destroyer USS Sterett, besides P8A maritime reconnaissance aircraft, will be on the show. The Royal Australian Navy will be represented by frigate Ballarat and its integral helicopter, the government statement said.

The Malabar series of exercises, which began as an annual bilateral naval exercise between India and the US in 1992, has seen increasing scope and complexity over the years. The 24th edition, being currently held, highlights enhanced convergence of views among the four vibrant democracies on maritime issues, and showcases their commitment to an open, inclusive Indo-Pacific and a rules-based international order.