The last rites of Major Prafulla Moharkar, who was killed in a cross-border attack by Pakistan troops in Jammu and Kashmir on Saturday, were performed with full military honours at his village in Maharashtra. 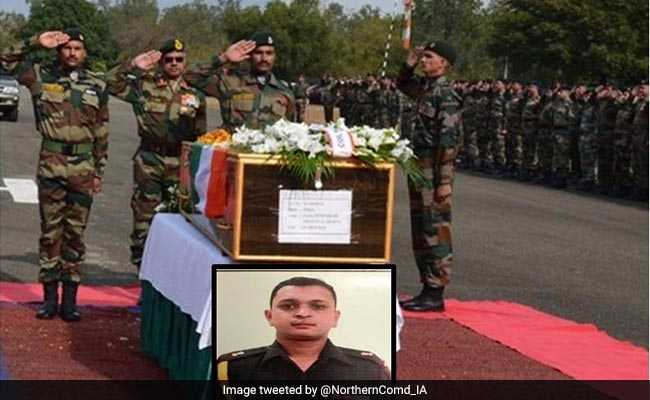 Nagpur: The last rites of Major Prafulla Moharkar, who was killed in a cross-border attack by Pakistan troops in Jammu and Kashmir on Saturday, were performed with full military honours at his village in Maharashtra. During the last rites, gun salutes were offered by the Army and the state police to the young martyr. The 32-year-old Major is survived by his wife Avoli Moharkar. His mortal remains were consigned to flames early morning today at Bhandara district's Pavni, his native village, in the presence of his father Ambadas Moharkar.

Thousands of people gathered in the village to pay their respects to Major Praffulla. State minister Rajkumar Badole and former member of the parliament Nana Patole were among those who were present. Local markets remained closed during the day as a mark of respect for the martyred solider.

"Major Moharkar Prafulla Ambadas, Lance Naik Gurmail Singh, Lance Naik Kuldeep Singh and Sepoy Pargat Singh were brave and sincere soldiers. The nation will always remain indebted to them for their supreme sacrifice and devotion to duty," the army had said in a statement.

To avenge killing of the four valiant Indian soldiers, five army commandos of the "Ghatak" battalion crossed the Line of Control in Jammu and Kashmir's Poonch on Monday evening and killed four Pakistani soldiers.

Promoted
Listen to the latest songs, only on JioSaavn.com
In April, two soldiers were murdered and mutilated near the Line of Control. It was suspected to be an attack by the Border Action Team. Weeks later, the Army released a video of a massive fire assault on Pakistani posts on May 23.

India had thwarted the last such effort in September this year when a large team of BAT soldiers were forced to retreat. In June, India had managed to kill two of the intruders when a similar attack by a much-smaller team was carried out but two Indian soldiers had also lost their lives.
Comments
major prafullaCeasefire violationpakistan attacks india