"Mahatma's Soul Would Be Pained": Sonia Gandhi's Swipe At Government

Sonia Gandhi said "India and Gandhi are synonymous. Yet some people want RSS to be synonymous with India,"

Sonia Gandhi said those indulging in "politics of falsehood" will not understand Mahatma Gandhi.

Congress chief Sonia Gandhi launched a sharp attack on the BJP and its ideological mentor, the Rashtriya Swayamsevak Sangh, on the 150th birth anniversary of Mahatma Gandhi today. Gandhi's soul, Mrs Gandhi said, "would have been pained by what's been happening in India in last few years".

Starting the day with a brief address at Rajghat, Sonia Gandhi said, "Those indulging in "politics of falsehood" will not understand Mahatma Gandhi".

"How will those who consider themselves supreme understand the sacrifices of Mahatma Gandhi....Those doing politics of falsehood will not understand Gandhi's philosophy of non-violence," she said. 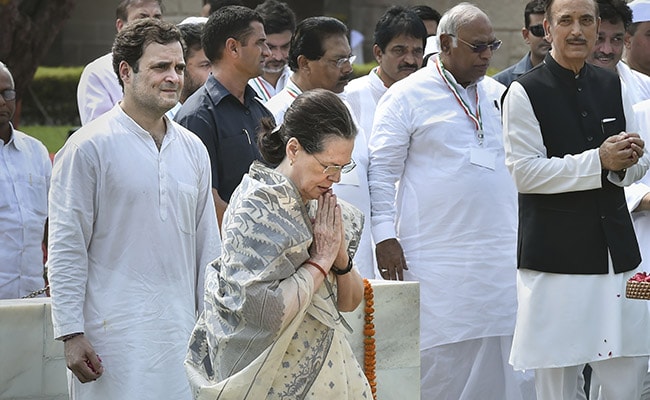 "India and Gandhi are synonymous. Yet some people want RSS to be synonymous with India," she said, administering an oath to Congress workers to adhere to the ideals of the Mahatma.

Earlier in the day, Congress leader Rahul Gandhi led a march of party workers to mark the occasion. The "Gandhi Sandesh Yatra" started from the Delhi Congress office at Deendayal Upadhyay Marg and culminated at Raj Ghat, around three km away.

"The Padyatra aims to redeem Gandhiji, Gandhism and Gandhi's India in our country today," the Congress tweeted.

Glimpses from the #GandhiSandeshYatra led by Shri @RahulGandhi

The Padyatra aims to redeem Gandhiji, Gandhism and Gandhi's India in our country today. pic.twitter.com/6xsx7NwlQO

A tableau depicting the Gandhi Ashram on the banks of Sabarmati river in Gujarat and his iconic wooden spinning wheel was also part of the march.

Later, Mrs Gandhi paid tribute to the Mahatma at the Central Hall of Parliament, along with Prime Minister Narendra Modi and other political leaders. The leaders also paid tributes to former Prime Minister Lal Bahadur Shastri on his 115th birth anniversary.

Congress general secretary Priyanka Gandhi Vadra is likely to participate in a foot march in Lucknow to commemorate the Mahatma's 150th birth anniversary.