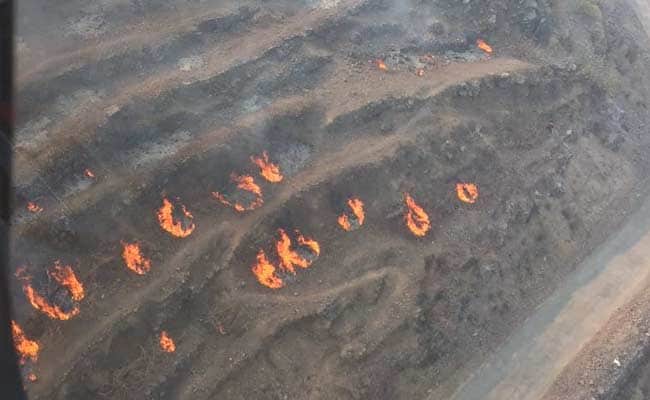 6,000 men, including the Army, the Air Force and three teams of National Disaster Relief Force work round the clock to contain the fires.

He directed officials to study national and international-level research in tackling forest fires and sought from them a proposal within 15 days on the purchase of latest modern technology to counter them.

Meanwhile, taking note of severe drought conditions in the state, Mungantiwar said that forest officials have been asked to study the latest machinery purchased by Karnataka at the cost of Rs. 12 crore that is capable of digging wells in three hours.

"People can raise their voice if drinking water is not available, but the mute wild animals cannot ask for water," the minister said.

He said the foresters have been asked to complete construction works of ponds in forest areas by May 31 by utilising funds allocated in the District Planning and Development Committees (DPDC).

"There are adequate watering holes for wild animals constructed in the forests in Maharashtra, which are fitted with automated water pumps," he said.

Referring to the fire in the Tadoba Andhari tiger reserve that was put out promptly on Sunday, the minister said the probe into the incident has revealed that it was caused by human negligence.

He said the forest department officials are training people living in buffer zones of forest areas in tackling forest fires.

Mungantiwar also announced that government will conduct a free-of-cost tour for 6,000 students from poor families in tiger reserves like Tadoba Andhari tiger reserve.

"The target of the government is to plant two crore trees in the ensuing monsoon season and to ensure survival of 80 per cent of the trees that will be planted this monsoon season," he said.