Resort Politics Back In Maharashtra Ahead Of Rajya Sabha Elections

Elections are due on six Rajya Sabha seats on June 10 and the shifting of the MLAs is being seen as a sign of concern about horse-trading. 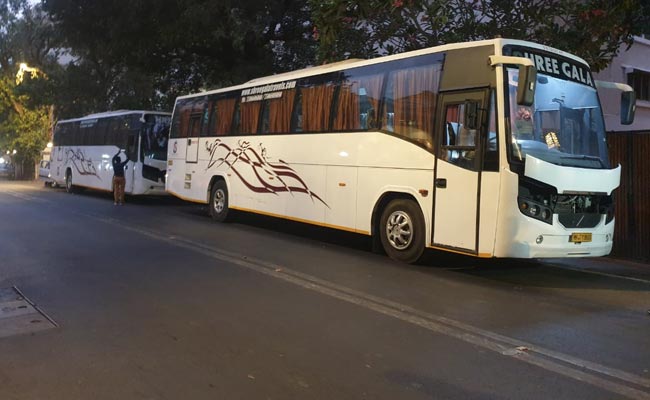 Uddhav Thackeray has called a meeting of all MLAs of the ruling alliance today.

Shiv Sena MLAs in Maharashtra have been moved to a resort ahead of the upcoming Rajya Sabha elections in the state. Legislators from other Maha Vikas Aghadi (MVA) constituents -- Nationalist Congress Party, and Congress -- will also be shifted to a resort as the ruling coalition ringfences its MLAs before the voting to the upper house. Chief Minister Uddhav Thackeray met independent MLAs on Monday to rally support for the MVA candidate for the sixth seat as the opposition BJP has rejected an offer from the ruling coalition to avoid elections. Mr Thackeray has also called a meeting of all MLAs of the MVA today.

There are 29 independents and smaller parties altogether out of which eight are believed to be supporting Sena while many others are yet to disclose their choice.

Determined to put up a spirited fight, former BJP Chief Minister Devendra Fadnavis has been working the phones and calling MLAs to shore up support despite being infected with Covid.

The Sena MLAs have been shifted to the Retreat hotel in Malad in the western suburbs of Mumbai. It's the same hotel where the MLAs of Shiv Sena were kept in 2019 during the MVA government formation.

Elections are due on six Rajya Sabha seats from Maharashtra on June 10 and the shifting of the MLAs is being seen as a sign of concern about horse-trading by the BJP ahead of the elections. Shiv Sena leader Sanjay Raut had in fact on Saturday, while expressing confidence that all four candidates of the ruling alliance will win the polls, said they wanted the polls to be deferred so that there is no horse-trading.

For the six seats up for grabs in the state, the BJP has fielded three candidates. In the ruling Maha Vikas Aghadi (MVA) camp, the Congress and Sharad Pawar's NCP have fielded one candidate each, and the Shiv Sena two.

The big contest will be for the sixth seat, with the BJP rejecting the MVA offer for an additional seat to avoid elections. The face-off will be between the BJP's Dhananjay Mahadik and Shiv Sena's Sanjay Pawar.

The BJP, which has 106 members in the House, has nominated Union minister Piyush Goyal, Anil Bonde and Dhananjay Mahadik.

The NCP has re-nominated former Union minister Praful Patel, while the Congress has fielded Imran Pratapgarhi. Sanjay Raut and Sanjay Pawar are nominees of the Shiv Sena.

Revenue Minister and senior Congress leader Balasaheb Thorat today said that they'll comfortably win the four seats as the ruling coalition already has more votes than it needs. "All Maharashtra MLAs will be together, we have a meeting this evening. We are still deliberating whether to shift Congress MLAs to a hotel," he told NDTV.

AIMIM chief Asaduddin Owaisi, who has two MLAs in the state, did not explicitly offer support but has said that the MVA should openly ask them for support if they really want to defeat the BJP.