Nawab Malik alleged that his arrest was "illegal" and that he was targeted for being a "vocal critic of the misuse of Central agencies". 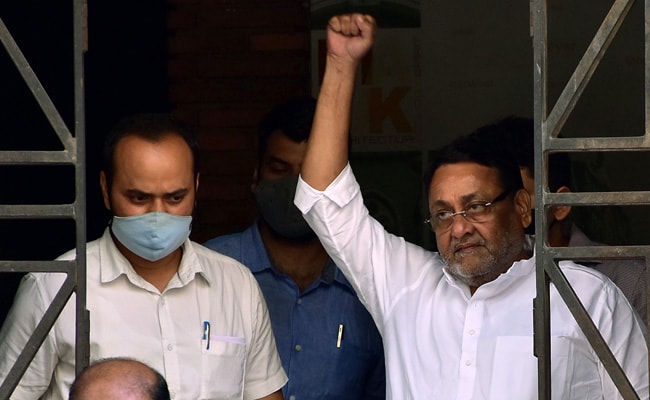 Mr Malik is presently in the custody of the ED till March 3.

Mr Malik is presently in the custody of the ED till March 3.

The Nationalist Congress Party leader on Monday filed a petition in the high court seeking to quash the case and also the order passed by a special court remanding him to the ED's custody.

He alleged that his arrest was "illegal" and that he was targeted for being a "vocal critic of the misuse of Central agencies".

The petitioner stated that he is not the first to be targeted and this is a worrying trend across the nation where Central agencies are being misused by the party in power.

Mr Malik sought his immediate release from the ED custody and requested the high court to declare his arrest illegal.

The plea is likely to be mentioned on Tuesday seeking an urgent hearing.

In his petition, Mr Malik stated that he was forcibly picked up from his residence by ED officials on February 23 without any notice or summons under section 41A of the Criminal Procedure Code.

The minister further stated that the February 23 order of the special court designated to hear Prevention of Money Laundering Act (PMLA) cases was without jurisdiction.

The ED's case is that Mr Malik, in connivance with Dawood Ibrahim's aides - Haseena Parker, Salim Patel and Sardar Khan, hatched a criminal conspiracy for usurping the ancestral property of one Munira Plumber in Kurla in Mumbai which is valued at around Rs 300 crore. Thus, it is the proceeds of crime, the federal anti-money laundering agency had claimed.

The ED case is based on an FIR filed recently by the National Investigation Agency (NIA) against Dawood Ibrahim and others. The NIA had filed its criminal complaint under sections of the Unlawful Activities Prevention Act (UAPA).

The Minority Affairs Minister's statement was recorded under the Prevention of Money Laundering Act (PMLA).