Election Results 2019 - "No Swearing-In Without Shiv Sena": BJP Amid Back-Channel Talks With Ally

Maharashtra Election Results: The Shiv Sena has stuck to the point it made right after the Maharashtra election results last week about a "50:50" deal with the BJP that it said was discussed before the national elections. 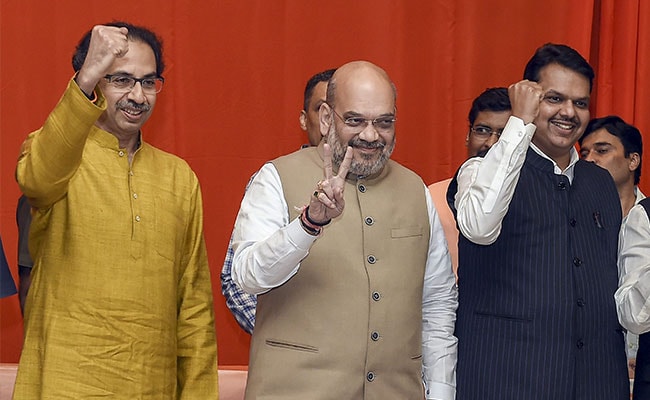 Maharashtra Elections: The BJP has made it clear that it will not share the Chief Minister's position.

There will be no oath ceremony in Maharashtra without the Shiv Sena, senior leaders of the BJP asserted today as the ruling party took a step towards Devendra Fadnavis's second term as chief minister against the backdrop of the Sena's demand for rotation of the top post.

The BJP's MLAs met to elect Devendra Fadnavis as their leader - a formality before he is sworn in as Chief Minister. "There will be a Sena-BJP government in the state soon. There should be no speculation. We had said the government will be formed by the mahayuti (alliance)," Mr Fadnavis said.

While going through the motions, the party has been deep into back-channel negotiations to bring the Sena around by offering key posts including Deputy Chief Ministership. Sena MLAs want the number two job for its debutant young leader Aditya Thackeray, the son of their chief Uddhav Thackeray.

For now, the BJP has made it clear that it will not share the Chief Minister's position. According to sources, it has offered more portfolios to its ally, both in Maharashtra and at the centre. But the offer does not include top portfolios like Home, Finance and Revenue for now.

The Shiv Sena has so far stuck to the point it made right after the Maharashtra election results last week about a "50:50" deal that it said was discussed earlier this year, before the national elections.

After rejecting it for days, the BJP yesterday conceded that such an arrangement was discussed but Mr Fadnavis denied any decision in his presence.

The BJP may soon stake claim to power as the single largest party. Sources say the BJP hopes for a pact with the Sena before the oath ceremony or at least before a floor test.

Among the scenarios in case of a breakdown in BJP-Sena talks, is a BJP government with the support of Sharad Pawar's Nationalist Congress Party or a Sena-NCP-Congress tie-up to keep the BJP out. Both are seen to be highly unlikely as of now. The NCP and the Congress have made it clear that they will sit in Opposition. "People of Maharashtra have given the mandate to BJP and Shiv Sena. We along with Congress and others will remain in opposition," said the NCP's Praful Patel.

The BJP won 105 seats and the Shiv Sena 56 in the 288-member Maharashtra assembly. Together, the two have 161 seats, way past the half-way mark of 144. The BJP's tally has dropped since 2014 and the Sena hopes to leverage its ally's increased dependence for a majority.

Today, nine more joined the BJP meeting, taking the party's tally to 114. The Shiv Sena has also claimed the support of 61 lawmakers.