Addressing the Sena workers in Mumbai for the second consecutive day, Aaditya Thackeray also said that doors of the state and party are closed for the rebels MLAs. 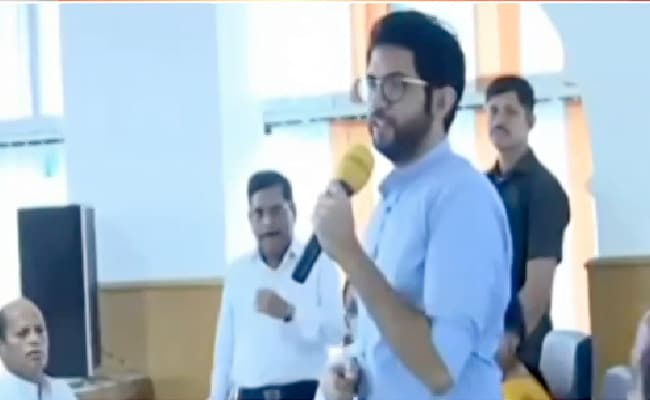 The rebels were taken to Guwahati as "prisoners", said Aaditya Thackeray. (FILE)

Slamming the dissident Shiv Sena MLAs for having "monstrous ambitions", minister Aaditya Thackeray on Sunday said even if all the party legislators turn rebels, victory will always be of the party.

Addressing the Sena workers in Mumbai for the second consecutive day, he also said that doors of the state and party are closed for the rebels MLAs.

"Contest elections again, we will ensure you are defeated," the 30-year-old son of Sena president and Chief Minister Uddhav Thackeray said.

Without naming the BJP, he said he felt ashamed that a party, which is in power at the Centre and Assam, have taken the MLAs from another ruling party from a different state and kept them in the north eastern state that is reeling under floods.

The rebels were taken to Guwahati as "prisoners". About 12 to 14 MLAs are still in touch with us, Mr Thackeray said.

"When these MLAs come to the state assembly, they should have the guts to see in our eyes and tell us what we have not done for them. The ambitions of these people are monstrous," the minister for environment and tourism said.

Sufficient development funds had been provided to all the legislators, he said, adding that the Shiv Sena has become the voice of the common people.

Majority of party MLAs have sided with rebel party minister Eknath Shinde and they are currently camping at Guwahati in Assam, a BJP-ruled state. Mr Shinde and his group have claimed that they are the "real Shiv Sena". The rebel group said it enjoys a two-thirds majority in the legislature party and will prove its strength in the House. The dissidents have named their group as "Shiv Sena (Balasaheb)".

"There was a lot of respect for Eknath Shinde in Shiv Sena. Only in May he had been asked whether he wants to become the chief minister...I pity him, I am not angry. He could have rebelled in Thane or Mumbai and spelled out his ambitions instead of running away to Surat and then to Guwahati," Thackeray said.

Addressing the party workers on Saturday, Aaditya had given a subtle warning to the party rebels, saying that the road from Mumbai airport to Vidhan Bhavan, the state legislature complex, goes via Worli.

Worli, traditionally a Shiv Sena bastion in Mumbai, is the assembly constituency represented by Aaditya Thackeray.

"The road from the airport to the Vidhan Bhavan passes via Worli. It's good that the rebels left (Shiv Sena). There is no room for traitors in the party," he had said. Aaditya has started holding meetings with the party workers and office-bearers from Saturday, which is being seen as a move to prevent any erosion of the cadre loyal to the Thackerays.

The Mumbai civic polls are expected to be held later this year and the Shiv Sena, which has been ruling Asia's largest civic body for nearly three decades, is striving to retain its hold over it.

The Maharashtra legislature secretariat had on Saturday issued 'summons' to 16 of the rebel Shiv Sena MLAs, including Shinde, seeking written replies by the evening of June 27 to the complaints seeking their disqualification.