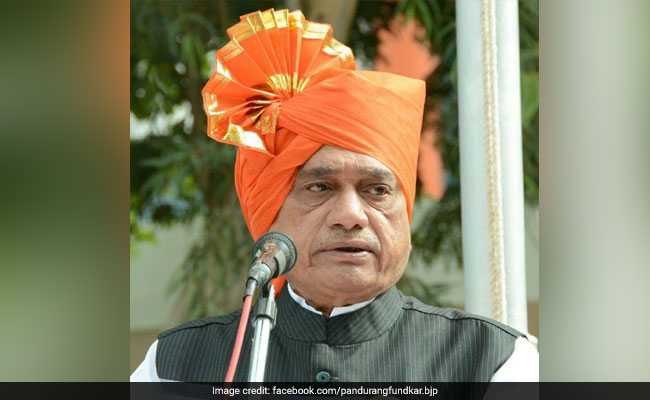 Maharashtra Agriculture Minister Pandurang Pundalik Fundkar died on Thursday after suffering a cardiac arrest. He was 67 and is survived by his wife Suneeta, two sons and a daughter.

Mr Fundkar,a diabetic, was admitted in KJ Somaiya Hospital in Mumbai since two days suffered an attack in on Thursday morning. Doctors tried to revive him but could not save him.

Prime Minister Narendra Modi paid his condolences and said that Mr Fundkar was at the forefront of working towards the welfare of farmers.

"Saddened by the demise of Maharashtra's Agriculture Minister Shri Pandurang Fundkar. He made an invaluable contribution towards building the BJP in Maharashtra. He was also at the forefront of serving the farmers of the state. My thoughts are with his family and supporters," tweeted Prime Minister Narendra Modi.

Saddened by the demise of Maharashtra's Agriculture Minister Shri Pandurang Fundkar. He made an invaluable contribution towards building the BJP in Maharashtra. He was also at the forefront of serving the farmers of the state. My thoughts are with his family and supporters.

Mr Fundkar was the president of Bharatiya Janata Party's Maharashtra unit between 1991 and 1996. He was elected in Chief Minister Devendra Fadnavis's cabinet in July 2016. He represented Akola parliamentary constituency three times.

Born on August 21, 1950 in Narkhed village of Nandura tehsil in Buldhana district, he could complete his education up to the first year of MA, Economics, a family member  told PTI.

"He was an active member of the RSS from childhood and joined Akhil Bharatiya Vidyarthi Parishad (ABVP) during his college days. He became a part of Jan Sangh in 1974 and also participated in protests against the Emergency," the family member said further.

Expressing grief over the BJP leader's death, NCP chief Sharad Pawar said, "He always took decisions that helped farmers. It is sad that he is no longer with us."

Promoted
Listen to the latest songs, only on JioSaavn.com
"He had won the Lok Sabha elections three times besides his success in the
assembly elections, which underscored his popularity among the people," Mr Pawar said.

NCP lealder Dhananjay Munde, who was earlier with BJP's youth wing for some years, said, "I feel like I have lost my mentor in politics. It is a big loss for the state."