The necklace worn by Maharani Jindan Kaur, the wife of emperor Maharaja Ranjit Singh, surpassed its estimated price between 80,000-120,000 pounds 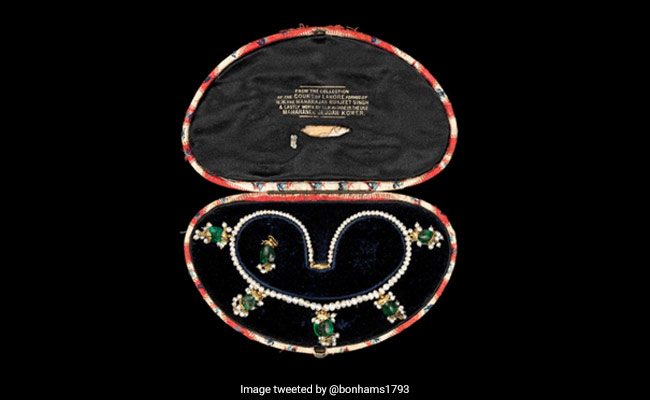 The emerald and seed-pearl necklace owned by Maharani Jindan Kaur.

An emerald and seed-pearl necklace owned by Maharani Jindan Kaur, the wife of Sikh emperor Maharaja Ranjit Singh, has sold for 187,000 pounds at a London auction after triggering a fierce bidding war, an official has said.

The necklace worn by Kaur, the final and the only one of Maharaja's wives not to commit Sati on his death, surpassed its estimated price between 80,000 and 120,000 pounds.

It was among a number of treasures from the Lahore Treasury auctioned as part of the 'Bonhams Islamic and Indian Art Sale' in London on Tuesday.

The entire sale, which had a number of items dating back to the Raj era, made an overall total of 1,818,500 pounds, the auction house said.

"In a highly successful sale, the Sikh treasures stood out with pride of place going to the magnificent necklace from the fabled Lahore Treasury that once belonged to the formidable and courageous Jindan Kaur," said Oliver White, Bonhams Head of Indian and Islamic Art.

"The high price reflected fierce and competitive bidding in the room, on the phones and over the internet," White said.

As Regent to her five-year-old son Duleep Singh, who was proclaimed Maharaja of Punjab in 1843, Kaur organised armed resistance to the British invasion but was captured and imprisoned.

Escaping to Kathmandu, she was kept under house arrest by the King of Nepal, before eventually moving to England where she was reunited with her son and her jewellery, including the necklace up for auction this week.

Among the other Sikh treasures on the sale included a gold-thread-embroidered, velvet-clad leather bow and arrow holder made for Maharaja Ranjit Singh, known as the Lion of Punjab, which sold for 100,000 pounds.

"The quiver was made purely for ceremonial purposes, and appears to have been rarely worn. As a result, it is in excellent condition," said White.

It is believed that the Maharaja commissioned a quiver in 1838 to wear at the wedding of his eldest son and heir Kharak, and he appears to be wearing the one in the sale in a painting of the same year by French artist Alfred de Dreaux, now in the Louvre Museum in Paris.

A Mughal emerald seal made for and bearing the name of, Marian Hastings, went under the hammer for 181,250 pounds.