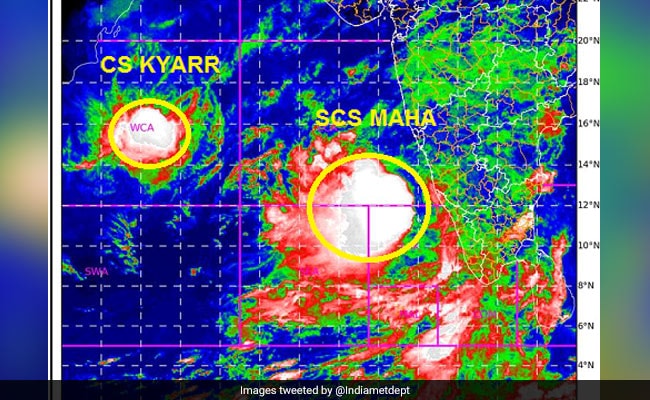 Maha cyclone has intensified into a severe cyclone storm over Lakshadweep and adjoining southeast Arabian Sea and Maldives area and into the cyclonic storm. Cyclone Kyarr will weaken gradually, the weather department said in its latest bulletin. Kerala, coastal Karnataka and south Tamil Nadu will see light to heavy rainfall at isolated places today and tomorrow. Extremely heavy rainfall is also expected at isolated places over Lakshadweep Islands.

CS MAHA intensified into a severe cyclonic storm at 1130 IST & centered about 25 km east-northeast of Chetlat Island (north Lakshadweep). To move north-northwestwards across Lakshadweep and emerge into eastcentral Arabian Sea during next 6 hrs.
CS KYARR to weaken gradually. pic.twitter.com/xtvndXuRwb

"Gale wind speed reaching 80-90 kmph gusting to 100 kmph is prevailing over Lakshadweep area around the system centre. It is very likely to increase becoming 100-110 kmph gusting to 120 kmph," the Met office said.

Two cyclonic storms are brewing in the Arabian Sea in a rare occurrence and one of them is likely to batter the Lakshadweep archipelago in the next 24 hours, the weather department said yesterday.

Cyclone "Kyarr" had turned into a super cyclone on Tuesday, another rare occasion for the western seafront of India.