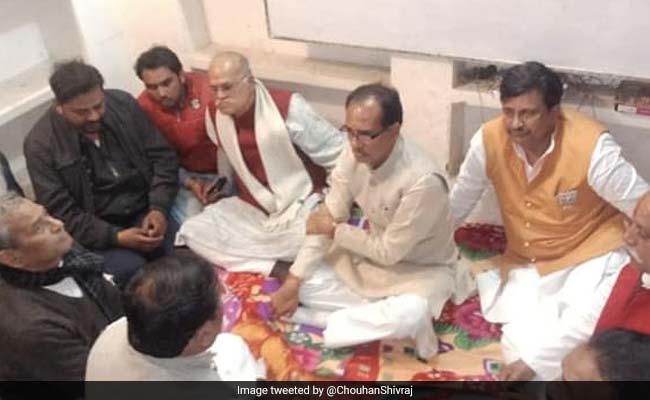 Shivraj Chouhan met the family of the twins murdered in Madhya Pradesh.

Former Madhya Pradesh Chief Minister Shivraj Chouhan has demanded a Central Bureau of Investigation (CBI) probe into the murder of twin brothers, who were kidnapped from their schoolbus in Chitrakoot on February 12. The children were found dead in a river in Uttar Pradesh's Banda district on Sunday, the police said, adding their hands were tied together to a stone.

"I would like to tell the Chief Minister (Kamal Nath) to give this case to CBI. Attempts are being made to twist the incident. Why didn't the investigating team find success in the case? Culprits must be hanged," Mr Chouhan, who met the family of the victims, was quoted as saying by the news agency ANI on Sunday.

Two masked men had barged into a schoolbus with guns and dragged the sons of a businessman. Both the boys were in kindergarten. On security footage from the bus of the school, children were seen sitting wide-eyed, looking at the intruders, whose faces were covered with a cloth.

"The kidnappers took the ransom and then killed the two children," a senior city officer said.

"I want to sleep, but have not sleep in the eyes, the mind is restless, how to find peace, just thinking that," Mr Chouhan tweeted in the early hours of Monday.

One of the accused is an engineering student. Another man, Vishnukanth or Chotu, is a local leader of the Bajrang Dal, police officer Chanchal Sekhar said.

"After getting to know that the children were no more, IG Reeva said a particular's party flag was on them who took them. To say that they were with a particular organisation proves that they (police) want to twist the incident to a new direction, so that confusion remains and they can hide their own failure," Mr Chouhan tweeted, slamming the police for not being able to find the children in time.

He added that a criminal has no religion, caste or a party.

The children used to travel 4 km across the border to the school every day, Satna district senior police officer Santosh Singh Gaur said.

The kidnapping could be the fallout of a rivalry the children's father, who is an oil trader, or his family, had with a gang, another police officer had said.

Just after the kidnapping, the police suspected a gang known as "Babuli Kol" took the brothers to the jungles.