After the response triggered a huge controversy, government officials swung into action and deleted the response from the portal. They also started work on the installation of the hand pump in the village.

The farmer Rahul Dixit also said he felt "insulted" and sought action against the official responsible.

Public helplines are often known for teaching harrowing lessons in governance but a death threat is still a fairly unusual experience. A farmer in Madhya Pradesh who complained last month to the Chief Minister's helpline about a defective hand pump in his village Rahavali in the Bhind district has received a shocking response last week: "Complainant is crazy, the hand pump will be fixed on his chest".

Rahul Dixit filed a complaint on the Chief Minister's Helpline on June 7 about a hand pump installed in his village eight months ago remaining non-functional. On July 9, he received a remarkable response to his complaint from the PHE (Public Health Engineering) Department saying:

Translation: "The complainant is crazy and gets epileptic seizures. The hand pump is working, but his brain isn't. The entire PHE department knows that. This mad man has torn the clothes of my hand pump mechanic. Now it is time for the Chinese war, which is a gorilla policy, the hand pump will be uprooted and fixed on the chest of the complainant." 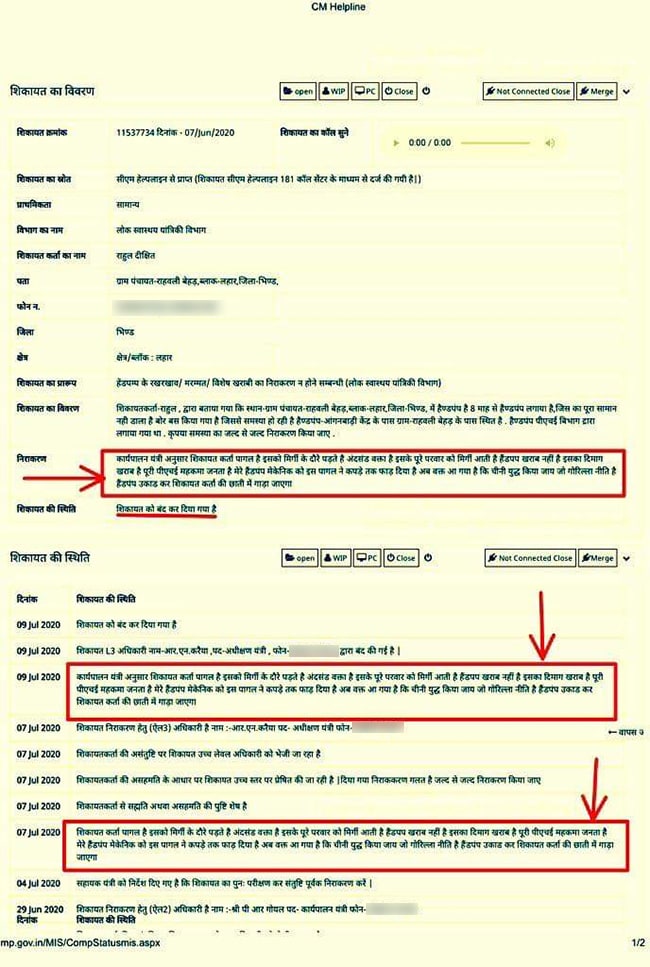 Soon after, PHE officials swung into action and deleted the response from the portal. They also started work on the installation of the hand pump. Executive engineer PHE in Bhind PK Goyal said, "Someone has done mischief by posting such a reply, which has come to the notice of senior officials of the department in Bhopal also. The matter has been reported to the Bhind district collector for a probe. It seems someone from our department only has deliberately posted such a shocking reply, which is a serious lapse and the culprit won't be spared."

The farmer Rahul Dixit also said he felt "insulted" and sought action against the official responsible.

The Madhya Prades administration had found itself at the centre of another controversy this week over the police assaulting a poor farmer couple for trying to stop their crops being destroyed by revenue officers that triggered widespread outrage.