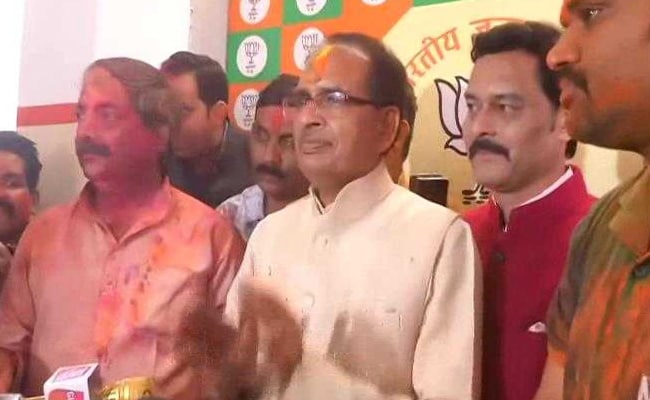 As trouble deepened for the Kamal Nath government in Madhya Pradesh after Jyotiraditya Scindia's exit from the Congress, BJP leader Shivraj Singh Chouhan today hit out at the rival party over its "double standards".

"For some Congress leaders when Scindia ji was in Congress, he was a maharaja (king), now he is a mafia? These are their double standards," Mr Chouhan was quoted as saying by news agency ANI, taking an apparent dig at Mr Kamal Nath. The Madhya Pradesh Chief Minister on Monday had launched an attacked on those trying to topple his government, dubbed them as "mafia".

Former union minister Jyotiraditya Scindia today ended his 18-year-long association with the Congress after meeting Prime Minister Narendra Modi and Union Home Minister Amit Shah this morning. He is likely to join the BJP, the party that his grandmother Vijayaraje Scindia had co-founded.

In his letter to party chief Sonia Gandhi, he wrote: "Having been a primary member of the Congress Party for the last 18 years, it is now time for me to move on. I am tendering my resignation from the primary membership of the Indian National Congress and as you well know, this is a path that has been drawing itself out over the last year."

In a quick response, the Congress tweeted Mr Scindia was expelled from the party. His exit from the Congress was followed by resignation of 21 MLAs.

Last evening, Chief Minister Kamal Nath had indicated that he is fighting back the attempts to topple his government with a cabinet rejig after 17 MLAs loyal to Mr Scindia flew to BJP-ruled Karnataka. "I won't let those forces succeed which are creating instability with mafia's help... which are creating instability in government, a government created by people of Madhya Pradesh," he was quoted as saying by news agency ANI.

As of this morning his government had 120 MLAs - just four over the majority mark of 116 in the 230-member assembly. The acceptance of the resignations will bring down the majority mark, which will help the BJP with 107 MLAs stake claim to power.