Kamal Nath, justifying his actions, said he couldn't have shown the lotus, which is the BJP's election symbol. 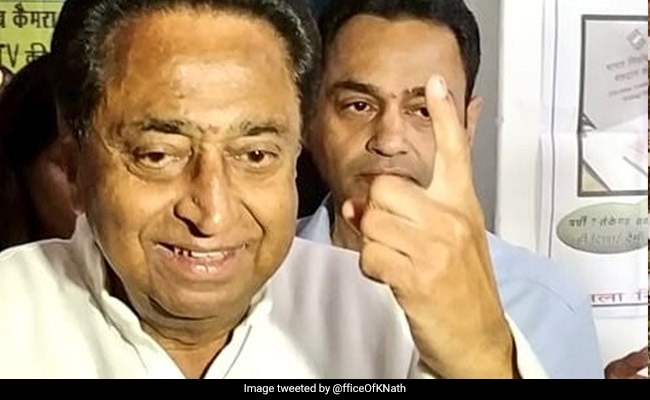 Kamal Nath is the election in-charge of the Congress in Madhya Pradesh.

A controversy has broken out in Madhya Pradesh over senior Congress leader Kamal Nath's gesture after casting his vote in the assembly polls today. Kamal Nath, after voting in Chhindwara this morning, says he showed his palm - the election symbol of his party - to reporters when asked who did he vote for. The BJP, however, alleges that Kamal Nath violated the Model Code of Conduct by showing the palm, and has approached the Election Commission, news agency ANI has reported.

Kamal Nath, justifying his actions, said he couldn't have shown the lotus, which is the BJP's election symbol.

"I had already cast my vote. When people asked me when those from media asked me whom I have voted for I showed this (palm). What else could have I done? Show a lotus?" Kamal Nath told ANI.

Kamal Nath, who is the election in-charge of the Congress in Madhya Pradesh, is hoping his party will dethrone the BJP from Madhya Pradesh, where the Shivraj Singh Chouhan government has been in power for the last three terms. The Congress is expecting anti-incumbency to sweep it back to power. But Shivraj Singh Chouhan claims his party's performance over the last 15 years is enough to win him the favour of the voters. It is "pro-incumbency and not anti-incumbency" which is at work, he has told reporters.

The Congress campaign in Madhya Pradesh has been dogged by reports of fallout between its three power centres in the state - Kamal Nath, former Chief Minister Digvijay Singh and Jyotiraditya Scindia, a close aide of party chief Rahul Gandhi. The leaders have denied any rift.

Madhya Pradesh, which voted in a single phase today, saw a turnout of 75 per cent, which is higher than the 2013 figure of 72.7 per cent. The results will be declared on December 11.