"The three days will be added in the Budget session, which would be a lengthy one," Legislative Assembly's Principal Secretary AP Singh said. 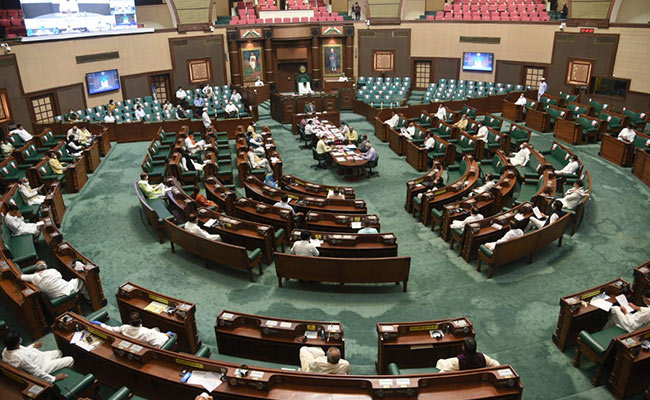 The all-party meeting was attended by Shivraj Singh Chouhan, Kamal Nath and others. (File)

The winter session of the Madhya Pradesh Assembly, which was scheduled to begin on December 28, has been postponed in view of the "COVID-19 situation", an official said on Sunday, hours after protem speaker disclosed that 61 employees and officials of the Assembly secretariat and five MLAs have tested coronavirus positive.

The decision to put off the three-day session was taken at an all-party meeting held in evening, he said.

"The three-day session has been postponed due to the COVID-19 situation. The three days (of the session which will be now washed out) will be added in the Budget session, which would be a lengthy one," Legislative Assembly's Principal Secretary AP Singh told reporters.

Meanwhile, former Union minister Arun Yadav said the Congress will continue to hold protests against the three farm laws passed by the Centre.

The Congress had earlier announced that the party leaders will reach the Assembly campus on Monday on tractors to protest against these laws.

Earlier in the day, Assembly Protem Speaker Rameshwar Sharma told reporters that 61 employees and officials of the state Assembly secretariat have tested coronavirus positive so far.

"Besides, five MLAs were also found infected as per the reports received till now," he said, after taking stock of the preparation for the session.

Mr Sharma also said the MLAs and their personal staff had been asked to undergo coronavirus test before the session began.

"So far, the test reports of 20 MLAs have been received. The reports of several other legislators are still awaited. Reports of more employees and officials are also yet to come," he added.