8 Dead, Over 9,000 Moved To Relief Camps Due To Floods In Madhya Pradesh

MP Flood: In the last two days, over 7,000 people stranded in 454 villages of 12 districts were evacuated as heavy rains hit large parts of the state, Mr Chouhan told reporters. 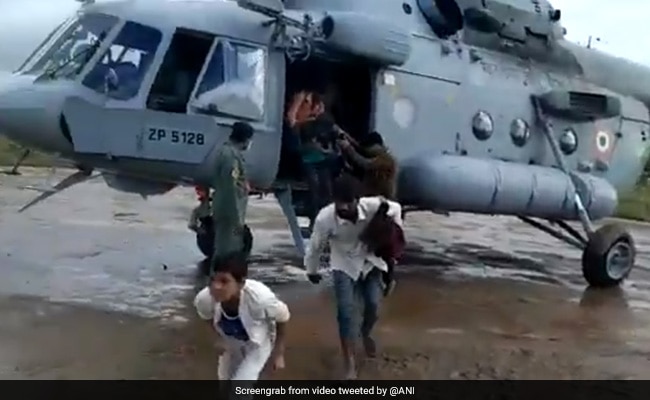 Eight people have been killed in rain-related incidents in Madhya Pradesh and efforts are currently underway to evacuate nearly 1,200 people stranded in 40 flooded villages of the state, Chief Minister Shivraj Singh Chouhan said on Sunday.

In the last two days, over 7,000 people stranded in 454 villages of 12 districts were evacuated as heavy rains hit large parts of the state, Mr Chouhan told reporters.

"Eight people have died in wall collapses and swollen nullahs so far," Mr Chouhan said after calling Prime Minister Narendra Modi to inform him about the situation in the state.

Efforts were underway on a war-footing to evacuate 1,200 people stranded in 40 villages of the state, he said.

As of now, 9,300 people are staying in 170 relief camps in the state, the chief minister said.

"I informed Prime Minister Narendra Modi about the flood situation this morning. I spoke to Defence Minister Rajnath Singh last night for help," he said.

Three helicopters of the Indian Air Force have been pressed into service to airlift stranded people, he said, adding that they have asked for two more choppers.

The Army (a column of 70 personnel) is already working and has evacuated people from flood-affected areas in Hoshangabad. More columns of the military have been requisitioned, he said.

Mr Chouhan said there was some let up in the rainfall on Sunday, and the system causing showers has moved to western Madhya Pradesh.

Heavy rainfall is expected in Indore, Ujjain, Shajapur, Ratlam, Dewas, Jhabua, Alirajpur, Mandsaur and Neemuch in next 24 hours. Authorities in these districts have been alerted, the chief minister said.

It is likely to shift to Rajasthan by 7 pm or 8 pm, he added.