The event came at a time when the Congress is reeling from one of its worst electoral performances yet, and Rahul Gandhi has decided to quit as party chief. 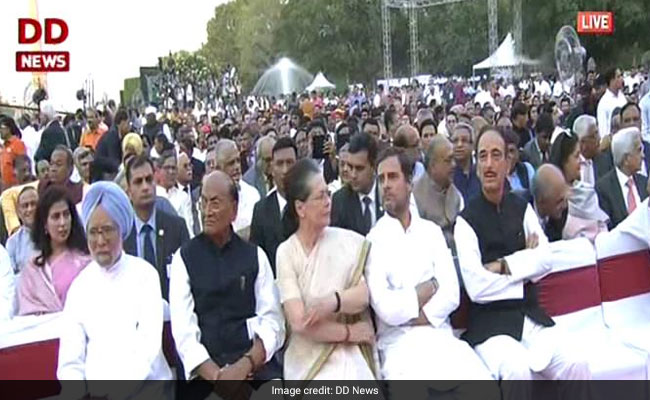 Congress chief Rahul Gandhi with Sonia Gandhi and other Congress leaders at the oath ceremony.

As the members of Prime Minister Narendra Modi's new cabinet were being sworn in at the Rashtrapati Bhavan, the Congress on Thursday sent out a tweet complimenting the BJP-led National Democratic Alliance on its new stint in governance. "Congratulations to PM @narendramodi and his new cabinet ministers. We wish them the best & look forward to working with them on the growth & development of India & all its citizens," the post read.

Among the leaders attending the glittering ceremony were Congress president Rahul Gandhi, his mother Sonia Gandhi and former Prime Minister Manmohan Singh. The event came at a time when the main opposition party is reeling from one of its worst electoral performances yet, having won just 52 seats across the country to the BJP's 303. Rahul Gandhi has taken responsibility for the drubbing, even announcing his decision to quit the Congress chief's position, and party leaders as well as alliance partners are still trying to convince him against taking such a drastic step.

Rahul Gandhi wants the Congress to be helmed by somebody who does not belong to the Nehru-Gandhi family, presumably to counter the BJP's perennial allegation that it is a "party of dynasts".

As many as 57 ministers joined PM Modi as he took oath for the second consecutive term this evening at a swearing-in ceremony that had over 8,000 guests -- including world leaders, dignitaries, politicians, celebrities and industrialists -- in attendance. While the 68-year-old Prime Minister walked to the podium to take his oath amid shouts of "Modi, Modi", two others -- BJP chief Amit Shah and Smriti Irani -- also drew loud cheers. Smriti Irani, who earned the distinction of defeating Rahul Gandhi in the Congress "stronghold" of Amethi, is expected to be rewarded with a plum ministry in the government.

On May 23, the day the votes cast in the Lok Sabha elections were counted, the Congress had tweeted out another congratulatory message to the BJP. "Congratulations to @BJP4India & @narendramodi on a decisive victory. The people of India have made their decision & we respect their mandate. We'd like to thank all our workers for their hard work. We wish the new govt the best & look forward to working towards India's future," it read.

Rahul Gandhi, for his part, sent out another tweet stating that he accepts "the verdict of the people of India". In a press conference held earlier, he had said that he will continue to spread the "message of love" in the future.

Facing a huge internal crisis in the wake of the Lok Sabha elections, which also saw several high-profile leaders taking moral responsibility for the loss and quitting their posts, the Congress had earlier on Thursday announced that it will not participate in television debates for a month. "The Congress has decided to not send spokespersons on television debates for a month. All media channels/editors are requested to not place party representatives on their shows," party spokesperson Randeep Surjewala said in a tweet. It later relaxed the order only for Kerala, where the Congress-led alliance won 19 of 20 seats.

BJP president Amit Shah, Rajnath Singh, Nirmala Sitharaman, Nitin Gadkari and Piyush Goyal are expected to get choice positions in the new cabinet. The portfolios are expected to be announced later tonight.