Man Beaten To Death On Busy Street Near Delhi, No One Helps

The video from Ghaziabad's Loni shows the lack of empathy as people stop to watch the man's murder, but no one comes forward to help. 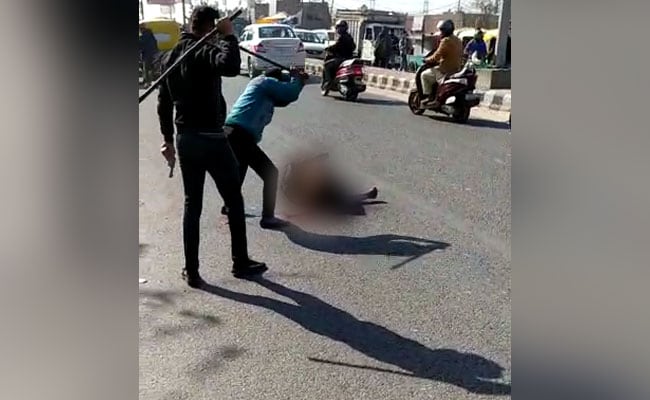 A man lies bloodied and motionless on a busy street as two men batter him to death with sticks, a gruesome video from Uttar Pradesh's Ghaziabad shows. Cars, motorcycles and vehicles pass by, someone even shoots a video of the horrific crime committed in the middle of the day, but no one stops the two men or takes the victim to the hospital.

The man, identified as Ajay, bled to death on the road Monday morning.

The video from Ghaziabad's Loni shows the lack of empathy as people stop to watch the man's murder, but no one comes forward to help.

The victim's brother Sanjay had even lodged a police complaint against the accused a few days ago, but apparently the cops had made them reach a compromise. There was a dispute over setting up a flower shop between the victim's brother and the main accused, Govind. His accomplice Amit was also seen in the video beating Ajay to death.

The video shows blood splattered on the road as the accused keep on hitting the victim before they flee the spot.

The police have also been facing backlash for allegedly not taking any action against the accused even after a complaint was filed by the victim's brother.

Both accused have been arrested in the case and further investigation is underway.