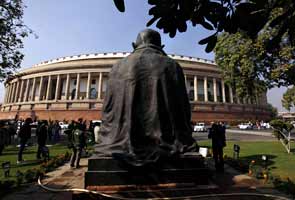 Forty-three years and at least eight versions of the Lokpal bill later, Parliament still hasn't reached consensus on who and what, exactly, it should cover.

All everyone can agree on is that Lokpal should be responsible for investigating complaints of corruption against public officials.

Although this bill has been successive governments' Achilles' heel for decades, it is only since last April that the Lokpal became a part of the national discourse. Anna Hazare, a retired soldier turned social activist, started a hunger fast unto death at Jantar Mantar in Delhi on April 5, 2011, demanding that the government pass his team's version of the bill. Mr Hazare's version of the anticorruption law, called the Jan Lokpal, demanded that the Lokpal be vested with powers to investigate and incarcerate corrupt officials without government or Parliamentary permission.

What started off as an ombudsman has threatened to morph into a supra-legislative, judicial and executive institution, in the form of the Jan Lokpal. Kapil Sibal, cabinet minister and a member of the joint-drafting committee consisting of representatives from the government and civil society, described the civil society's version of the ombudsman as a "Frankenstein monster without accountability and act as an oppressive institution outside the state."

This became the main sticking point between the government and social activists, who claimed that the government's version of the bill had no teeth and announced a fast unto death in support of their demands. But what of civil society's Jan Lokpal Bill?  Pratap Bhanu Mehta, president of the Center for Policy Research, was of the opinion that "the general premises that underlie the various drafts border on being daft. They amount to an unparalleled concentration of power in one institution that will literally be able to summon any institution and command any kind of police, judicial and investigative power."

Within a week of the fast being called off, the first meeting of the joint drafting committee was held, where it was decided that the prime minister and leader of the opposition would feature in the selection process of the Lokpal. Subsequent meetings, however, were not as fruitful, as the rift between the government and civil society members grew. Anna Hazare accused the government of putting on a pretense, labeled the joint drafting committee a joke and threatened to restart his agitation in August if they didn't reach consensus.

True to his words, Mr Hazare embarked on yet another hunger strike starting on Aug. 16. The primary differences were on the decision to include the prime minister's office under the Lokpal, the Lokpal's extra-judicial powers, the inclusion of the lower bureaucracy under the purview of the anticorruption body and the independence of the Central Bureau of Investigation, India's equivalent of the F.B.I.

Twelve days later, Mr Hazare ended his fast, claiming partial victory, after the government accepted all three of his demands - "that Parliament pass a Lokpal law during its current session; that similar agencies to fight corruption be established at the state level; and that a transparent process be established for public grievances."

But a sense of victory did not emanate from all quarters of civil society. "There are contentious issues, too many to mention here, including fuzzy definitions, inadequate separation of judicial and police powers, and possible prosecution of bribe givers," wrote Samar Halarnkar, editor-at-large, Hindustan Times, of the Jan Lokpal bill. Sunil Jain, opinion editor of the Financial Express, pointed to several sections in the bill, which put the Lokpal in direct conflict with the democratically elected government as well as judiciary. For example, Section 18(vi), which allows the Lokpal "to suspend a public servant" also allows it to "interfere with the work the courts do in the event there is a complaint about a judge."

Despite its many shortcomings, however, Mr Hazare's demands were echoed by hundreds of thousands of citizens across the country. The middle class, the main beneficiaries of India's liberalisation, tired of living with corruption, raised its voice. "Buying power is not political power, at least not yet in India. The wealthier India has become, the more politically disillusioned many of the beneficiaries have grown," writes Jim Yardley, on why Hazare's movement resonated with the masses.

The Lokpal legislation is finally expected to come up for consideration by Parliament on Dec. 20, three days before the winter session adjourns. In the midst of all the political wrangling, Anna Hazare has accused Rahul Gandhi of being the cause behind the government's volte-face on including the lower bureaucracy under the Lokpal, claiming that the government has "no will to bring Jan Lokpal" to Parliament.

Promoted
Listen to the latest songs, only on JioSaavn.com
Mr Hazare, who returned to his village in Maharashtra after the fast in August, has once again returned to the national capital, setting the stage for yet another campaign if the bill is not passed in the winter session of Parliament. The government, under pressure from opposition parties, is taking no chances on having this legislation passed and is planning an all-party meeting to discuss the bill before bringing it to Parliament.

Will the government be successful in having everything signed and sealed before bringing the Lokpal bill to Parliament? Or will Mr Hazare be forced to fast another day?