"India A State For All": Rahul Gandhi, HD Deve Gowda At Karnataka Rally

While Rahul Gandhi accused the Narendra Modi government of making false promises, HD Kumaraswamy spoke on the need to defeat the BJP. 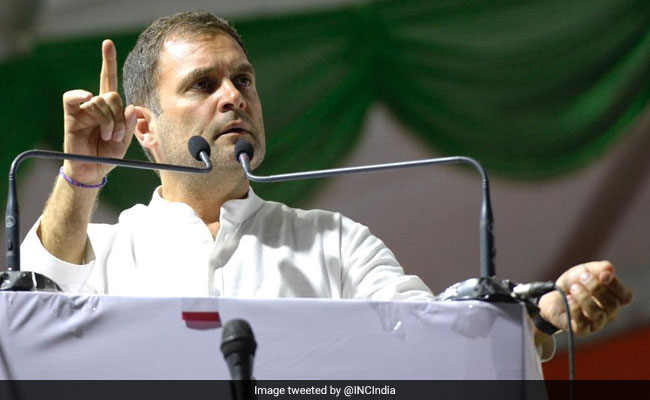 Congress president Rahul Gandhi and Janata Dal Secular chief HD Deve Gowda held a joint rally with other leaders at Nelamangala on the outskirts of Bengaluru today, sending out a clear message that the two parties were capable of working together.

"All Congress workers will support and campaign for Janata Dal Secular candidates. In the last five years (under the BJP-ruled centre), there have been no programmes for the farmers or the needy. The Congress has decided to give money to these groups. The Nyay Yojana was announced for the poor. Narendra Modi had promised 15 lakhs to everyone, but did you get it?" Rahul Gandhi asked.

He also slammed various initiatives introduced by the ruling BJP since 2014. "The Modi government has announced schemes like 'Make in India' and 'Start-Up India', but a reality check shows unemployment at its highest in 45 years," Rahul Gandhi said. "On the other hand, the Gabbar Singh Tax (in a reference to the government's Goods and Services Tax) has attacked small businesses through five different taxes."

Mr Gowda, a former Prime Minister, spoke of strengthening the secular coalition of opposition parties across the country. "India is not a Hindu state," he said. "It is a state for all the people."

Relations between the two coalition partners had soured in January, when the Janata Dal Secular took exception to certain Congress leaders criticising Chief Minister HD Kumaraswamy's governance. The latter even threatened to step down unless his critics were reined in.

This time, however, Mr Kumaraswamy spoke of togetherness and the need to defeat the BJP. "Narendra Modi lies so much when he speaks on stage. He said no farmer loans were being waived in Karnataka, but our coalition government is doing just that. The loans of 44 lakh farming families have been waived so far," he said.

Former Chief Minister Siddaramaiah reiterated his party's claim that PM Modi was only a rich person's chowkidar (watchman). "The NDA should be defeated and the UPA should come back under Rahul Gandhi. We must defeat the communal BJP," he said.

Although the rally was scheduled to start at 4:15 pm, Rahul Gandhi and Deve Gowda arrived at the venue only by 6 pm.

The two parties, who head a coalition government in Karnataka, are fighting the Lok Sabha elections together. While the Congress is contesting 21 of the state's 28 Lok Sabha seats, the Janata Dal Secular is fielding candidates from the other seven. The state will vote for 14 seats on April 18, and the other 14 on April 23.