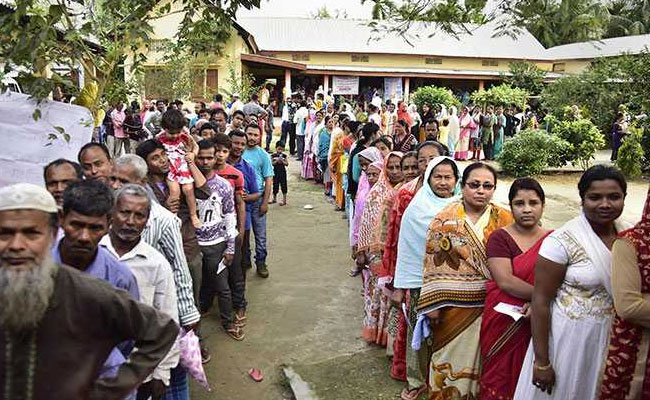 Rajasthan has a total of 25 Lok Sabha seats and 13 of them went to poll on April 29.

A voter turnout of 50 per cent was recorded till 3 pm on Monday in 12 Lok Sabha seats in Rajasthan where two former Olympians are among the 134 candidates in the fray.

The maximum voter turnout of 57.10 per cent was recorded in Ganganagar (SC) seat, while Churu, Jaipur and Alwar recorded 51.84 per cent, 54.39 per cent and 51.31 per cent polling respectively, according to the website of the chief electoral officer of Rajasthan.

The website of the chief electoral officer of Rajasthan stated that the overall polling percentage in the 12 seats till 3 pm was 50.02 per cent.

A total of 2.30 crore voters across these 12 constituencies are eligible to decide the fate of the 134 candidates, among whom 16 are women.

As many as 23,738 polling stations have been set up in the state for the fifth phase of the Lok Sabha elections.

While Mr Rathore is banking on the "Modi factor" for his re-election from the Jaipur rural seat and has highlighted national security as the key issue during the hustings, Congress MLA Poonia questioned the works done by the sitting BJP parliamentarian.

The seat, which Mr Rathore won in 2014 with a margin of 3.32 lakh votes, is dominated by the Jat community to which Poonia belongs.
Union minister Arjun Ram Meghwal is facing a tough fight from his cousin and Congress candidate Madangopal Meghwal in Bikaner.

Two 'sants', Sumedhanand Saraswati and Baba Balaknath, are trying their luck from Sikar and Alwar constituencies respectively. In Alwar, Congress candidate and former union minister and ex-royal Bhanwar Jitendra Singh is in the fray.

Rajasthan has a total of 25 Lok Sabha seats and 13 of them went to poll on April 29.