Lok Sabha Elections 2019: The NCP has been winning from Baramati Lok Sabha seat since 1999. 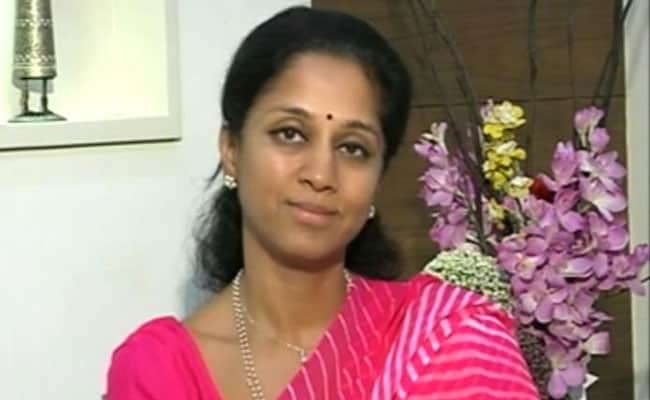 Supriya Sule had defeated Mahadev Jankar by more than 70,000 votes in 2014 (File Photo)

NCP leader Supriya Sule weathered the "Modi wave'' of 2014 to retain the family pocket borough of Baramati, though by a reduced margin, against Mahadev Jankar of the Rashtriya Samaj Paksh (RSP), a BJP ally.

In 2019, BJP president Amit Shah has set his workers a target of winning 45 out of 48 seats in Maharashtra including Baramati. The party has fielded a candidate on its own symbol, sending a message that it intends to give a tough fight to the Pawars on their home turf.

The NCP has been winning from Baramati Lok Sabha seat since 1999.

To take on Ms Sule, the BJP has given ticket to Kanchan Kul, wife of Rahul Kul, the RSP assembly lawmaker from Daund, who wields a considerable political clout in the area.

The victory margin was comfortable, but much smaller than in 2009 when she had won by more than three lakh votes.

This time, Ms Sule is leaving no stone unturned, reaching out to people across the constituency which covers assembly segments of Baramati, Daund, Indapur, Bhor, Khadakwasla and Purandar.

While the core of the constituency is made up of rural areas, the fringe areas of Khadakwasla, Balewadi, IT hub Hinjawadi along with Dhanakwadi and Chandani Chowk which are part of Pune city have urban voters.

NCP's Pune district chief Pradip Garatkar said the Modi wave and anti-incumbency did have some impact in 2014, but now people have experienced the BJP rule and are disappointed.

"Farmers are in great distress. There is a lot of anger against both the state and the centre," he said.

Ms Sule has worked very hard in the last five years, he said. "We have a very strong organisation. NCP workers have a strong presence at the booth-level," he added.

Mr Garatkar denied that the BJP fielding a candidate on its own lotus symbol will make any difference.

Ms Sule, a recipient of the best parliamentarian award, has regained ground by addressing people's issues and ensuring implementation of various schemes, he said, claiming that she will win by at least 3 lakh votes.

Rahul Kul, on the other hand, expressed confidence that the development works carried out by the BJP-led governments in the state and the centre will tilt the scales in his wife's favour.

"We want here the kind of development that has taken place elsewhere in the state, which is possible only if the BJP candidate wins," he told PTI.

"At present development is restricted only to Baramati town and adjoining areas," he claimed.

"While our priority in urban areas will be to address traffic congestion, waste management, bad roads and other urban issues, in rural areas the focus will be on the issue of irrigation," he said.

Prime Minister Narendra Modi had not addressed any rally in Baramati in 2014, but this time state leaders were trying to organise a Modi rally in the constituency, Mr Kul said.

Prakash Pawar, a financial adviser and a resident of Kirkatwadi village in Khadakwasla area, said being on the outskirts of Pune city, it is grappling with issues of roads, water supply, sanitation and waste management.

Mr Pawar praised Ms Sule, saying she promptly looked into issues related to roads and waste management whenever they approached her.

Of the six Assembly segments in the constituency, two are represented by the NCP (Baramati and Indapur) and one each by RSP (Daund), BJP (Khadakwasla), Shiv Sena (Purandar) and Congress (Bhor).