"Special Poll, Think Who You Vote For": Mamata Banerjee In Andhra Pradesh

Both leaders launched a sharp attack on the BJP, and Ms Banerjee, much like Congress chief Rahul Gandhi, challenged the Prime Minister to a US Presidential-style debate, in full view of television cameras 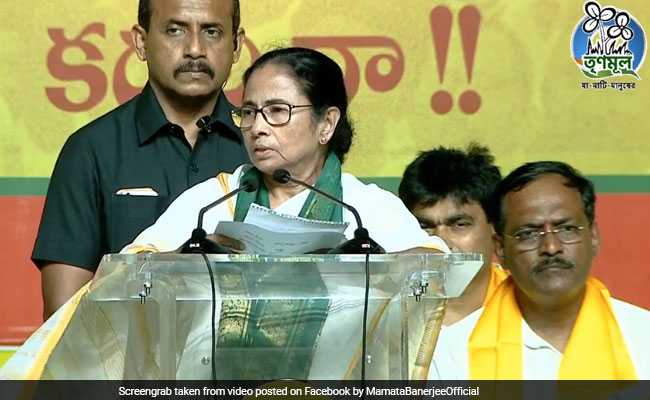 This is a special election. You must think through who you vote for: Mamata Banerjee

Andhra Pradesh Chief Minister Chandrababu Naidu, whose biggest rival in the state is the YSR Congress led by Jaganmohan Reddy, turned up to campaign in Vishakhapatnam on Sunday with two of the staunchest critics of Prime Minister Narendra Modi: Bengal Chief Minister Mamata Banerjee and Delhi Chief Minister Arvind Kejriwal.

Both leaders launched a sharp attack on the BJP, and Ms Banerjee, much like Congress chief Rahul Gandhi, challenged the Prime Minister to a US Presidential-style debate, in full view of television cameras. "If they can do it abroad, why don't we do one here?" she said.

"This is a special election. You must think through who you vote for... We will not let Modi win. Delhi will have janata's sarkar (government of the people)... You don't worry after we win, we will have a PM candidate," Ms Banerjee added.

PM Modi led the "most corrupt" government since Independence and along with BJP chief Amit Shah, "divided the nation on religious lines in just five years" - something Pakistan could not do in 70 years, Mr Kejriwal said.

While Rahul Gandhi was in the state too, campaigning for the Congress, the opposition orchestrated its strategy to favour Mr Naidu's Telugu Desam Party.

The prospects of the Congress, which is contesting all 25 Lok Sabha seats and 175 assembly seats, are questionable as the people blame the party for the bifurcation of Telangana. In the 2014 elections, the Congress was practically wiped out in the state, failing to win a single seat in parliament or the assembly.

But in the near absence of a BJP footprint in the state, the Congress decision to fight all 175 assembly and 25 Lok Sabha seats is expected to cut into the votes of Mr Naidu's biggest rival – the YSR Congress.

Mr Gandhi on Sunday promised special category status to the state, which, too, is expected to add to Mr Naidu's appeal - unlike YSR Congress, Mr Naidu and the Congress are allies at the national level.

The choice of the venue, Vishakhapatnam, was ironic. In 2014, PM Modi, Chandrababu Naidu, Venkaiah Naidu and actor-politician Pawan Kalyan, who leads Jana Sena, had addressed a rally at the same venue, seeking mandate for the TDP.

Last year, Mr Naidu had walked out of the alliance after the Centre refused to give Andhra Pradesh the Special Category State status. Since then, he has been one of the key advocates for a united opposition and has been fighting for visibility over the special status issue.

Over the last year, Jaganmohan Reddy has managed to stay in the public eye over the special status issue with the state's longest-ever foot-march since November 2017, covering over 3,500 km.