The Congress entry, however, is expected to cut into the votes of Chandrababu Naidu's biggest rival - the YSR Congress led by Jaganmohan Reddy. 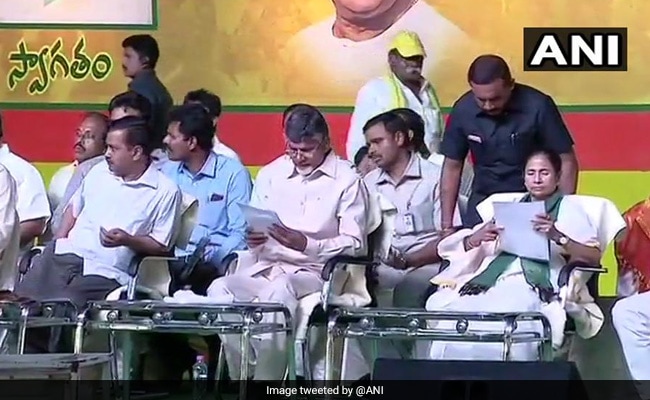 Arvind Kejriwal, Chandrababu Naidu and Mamta Banerjee have been traditional rivals of the Congress

The combined forces of the opposition descended upon Andhra Pradesh today to campaign in favour Chief Minister Chandrababu Naidu's Telugu Desam Party. While the Chief Minister was accompanied by his counterparts from Bengal and Delhi, Rahul Gandhi campaigned in Vijayawada for the Congress, which is contesting all 175 Assembly and 25 Lok Sabha seats of the state. The Congress entry, however, is expected to cut into the votes of Mr Naidu's biggest rival - the YSR Congress led by Jaganmohan Reddy.

Both Mamata Banerjee And Arvind Kejriwal are expected to attend Mr Naidu's rally at Vishakhapatnam this evening.

The pitting of opposition candidates against each other had been a major concern of opposition leaders like Mr Naidu, who had advised both Ms Banerjee and Mr Kejriwal to form alliances with the Congress so the anti-BJP votes do not get split.

But in Andhra Pradesh, the Congress entry into the poll fray is expected to benefit Mr Naidu's Telugu Desam Party or the TDP by splitting the Reddy votes that would have gone to the YSR Congress.

The TDP chief, who put behind decades of rivalry to open a dialogue with the Congress last year, had ruled out an alliance in view of the deep antipathy towards the party in the state following the bifurcation of Telangana.

In the 2014 elections, The Congress had failed to win a single Lok Sabha or assembly seat in the state. The Telugu Desam Party had won 102 of the 175 assembly seats and 15 of the Lok Sabha seats.

Besides Ms Banerjee and Mr Kejriwal, several other opposition leaders are expected to campaign for the TDP leader. The list includes RJD leader Tejaswi Yadav, JDS chief H D Deve Gowda and DMK chief M K Stalin, who are expected to visit the state next week.