Last month, Shatrughan Sinha had said he was "painfully leaving" the BJP post a fallout with the party leadership after he was left out of the cabinet. 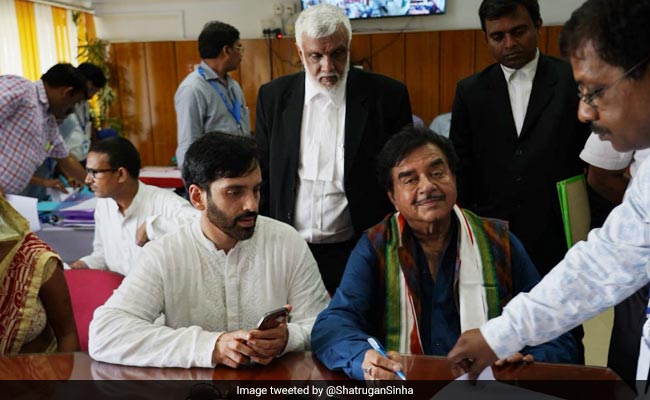 Congress's new recruit Shatrughan Sinha filed his nomination papers from the Patna Sahib constituency in Bihar today. The actor-turned-politician was accompanied by senior Congress leaders in Patna, his hometown.

Donning his trademark sunglasses and full-sleeved kurta with an angavastram dyed in shades representative of the Congress flag, Sinha accompanied by son Luv reached the collectorate in a grand procession.

Thousands of his supporters chanted the slogan ''Bihari Babu Zindabad'' as the procession commenced from his residence at Kadam Kuan.

"Huge turnout of supporters, friends and my dear residents of Patna as I moved from my Kadam Kuan residence through the streets of Patna for my nomination. My most heartfelt gratitude to all those who stepped out in my support and joined the procession in my roadshow. Jai Bihar," Mr Sinha tweeted afterwards.

Shatrughan Sinha had quit the BJP and joined Congress early this month after his former party decided to field Union Minister Ravi Shankar Prasad from Patna Sahib, a seat he had won in 2014 on a BJP ticket.

Last month, Mr Sinha had said he was "painfully leaving" the BJP post a fallout with the party leadership after he was left out of the cabinet.

Post the fallout, he had been known to launch brutal attacks on the BJP as well as Prime Minister Narendra Modi. Despite his public attacks, the BJP stopped short of sacking him or taking any disciplinary action.

The 72-year-old however took it up a notch when he attended the Opposition mega rally in Kolkata and attacked the prime minister.

"Even if I'm part of the BJP, I speak for the people and the country first. During Atal Bihari Vajpayee's time, the focus was "lokshahi" or democracy but now in PM Modi's time it is "tanashahi" or dictatorship," he had said at the rally. As reports of his replacement emerged, Shatrughan Sinha declared that he would contest from Patna Sahib, no matter what, even if it meant joining another party. Then, he was left out of the BJP's list of Lok Sabha candidates.

Then, Mr Sinha met Rahul Gandhi at the end of last month and showered praises on the Congress chief before formally joining the party on April 6 ending his nearly three decades long association with the BJP.

The battle in Patna Sahib will be a critical one as Shatrughan Sinha takes on Ravi Shankar Prasad, a Rajya Sabha member from Bihar. Mr Sinha had defeated Shekhar Suman, another actor, from Patna Sahib in the 2014 general elections.

Earlier today, Mr Sinha took out a roadshow in Patna which saw the participation of hundreds of residents and supporters.

Patna Sahib goes to the polls in the last phase of the Lok Sabha elections on May 19. Counting of votes will be done on May 23.