Lok Sabha Elections 2019: Shatrughan Sinha, who joined the Congress recently after switching his loyalty of more than three decades with BJP, is locked in a direct electoral battle with Union Law minister Ravi Shankar Prasad. 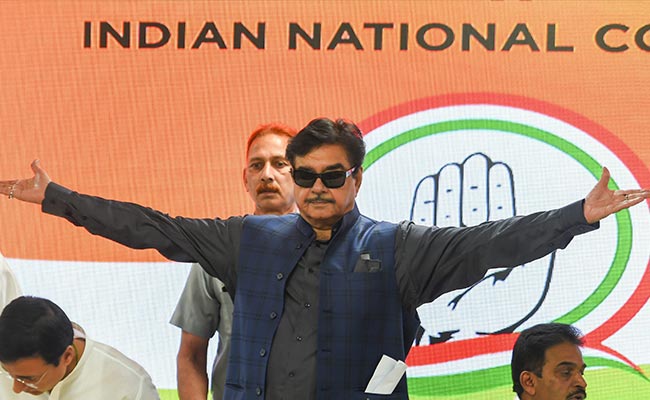 Mr Sinha, who joined the Congress recently after switching his loyalty of more than three decades with BJP, is locked in a direct electoral battle with Union Law minister Ravi Shankar Prasad.

Mr Sinha filed his papers on Monday, the last date for filing of nomination papers for Patna Sahib constituency which would go to polls on May 19.

The actor has Rs 2.74 crore as fixed deposits in bank and Rs 29.10 lakh as investments in shares, bonds, mutual funds, the affidavit said.

According to the affidavit, Mr Sinha possesses seven cars including one Ambassador, two Camrys, one Fortuner, Innova, Maruti Ciaz and Scorpio all worth Rs 14.80 lakh.

Both Shtrughan Sinha and Poonam Sinha have not taken any loans from banks or financial institutions but both owe an outstanding due in crores to be paid to their actor-daughter Sonakshi Sinha.

As on March 2019, the outstanding dues that Mr Sinha owes to his daughter stood at Rs 10.59 crore while his wife has taken Rs 16.18 crore from her daughter.

Mr Sinha's rival and BJP candidate Ravi Shankar Prasad and his wife have less assets in comparison to Bollywood star and his wife Poonam Sinha.

There are no outstanding loans or dues of any bank, financial institutions pending against Mr Prasad or his wife, it said.

Mr Prasad, who is a well-known Supreme Court lawyer, did his graduation and post-graduation from Patna College and he completed his LLB from Patna Law College in 1976-79.

Video Shows Ants On Face Of Paralysed Covid Patient In Gujarat, Probe On