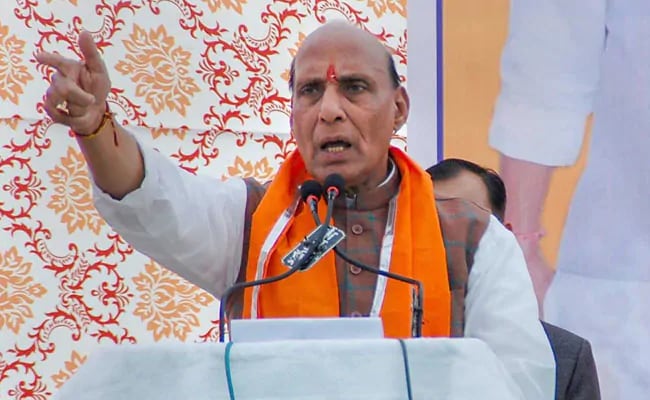 Rajnath Singh claimed the BJP would get a clear mandate in the Lok Sabha elections. (File)

Union Home Minister and senior BJP leader Rajnath Singh on Wednesday said the number of terrorists killed in the Balakot air strikes was "high", and accused the Congress of politicising the anti-terror operation by the Indian Air Force.

Claiming the BJP would get a clear mandate in the Lok Sabha elections, Mr Singh said he has no doubt in his mind that the NDA allies will retain power with a three-fourth majority.

He said the Congress is politicising the Balakot air strikes and dismissed its demand of proof of casualties in the operation as "uncalled for".

The IAF had struck a Jaish-e-Mohammad terror training camp in Pakistan on February 26 in response to the February 14 Pulwama attack in which 40 CRPF personnel were killed.

"Had there been 1, 2, 3 or 4 casualties, then we could have given a figure, but how can we tell (the exact casualties) when this figure was so high?"

"I head the intelligence agencies. I would like to say we carried out the air strikes on the basis of credible and actionable inputs, and without violating Pakistan's sovereignty," the home minister said.

Mr Singh said if the then Prime Minister Indira Gandhi was hailed for splitting Pakistan in 1971, then why can't PM Modi be praised for the Balakot air strikes.

Slamming the opposition for pointing fingers at electronic voting machines, he said, "The (voting) trend in the first phase of elections suggested the NDA would get a two-thirds majority. Soon the opposition launched an attack on EMVs.

"When these people (Congress) won (assembly polls) in Madhya Pradesh, Rajasthan and Chhattisgarh last year, then EVMs were right, but when they saw we are inching towards victory, they again started crying foul on EVMs."

Mr Singh strongly defended the alliance between the BJP and the Shiv Sena, saying it is based on their shared ideology of nationalism.

No one can break the BJP-Shiv Sena alliance in the state, Mr Singh asserted.

He said NCP chief Sharad Pawar had sensed his defeat in the Lok Sabha elections and hence decided to stay away from the poll fray.

Mr Singh, contesting from the Lucknow Lok Sabha seat, lauded the government of Prime Minister Modi and said under his watch India saw a quantum jump in its economic ranking.

"And I would like to say...in the coming years, we are going to attain the 5th position," Mr Singh said.

The home minister said India is no more a country of the poor people and "we are now one of the fastest-growing economies in the world".

It is unfortunate that Congress president Rahul Gandhi is "using foul" language against the prime minister of the country, Singh said.

"To say "chowkidar chor hai'' (Rahul's jibe at the PM over the Rafale deal) is stooping too low. I was shocked when I first heard such a language for our prime minister."

"The Congress government did not buy a single next generation fighter plane in the last 30 years. Had we got Rafale jets, we could have destroyed Pakistan-based (terror) camps while sitting in India," Mr Singh said.

Instead of attacking the PM, the Congress should introspect why it is losing base, he said.

The BJP veteran said the Congress governments under Jawaharlal Nehru, Indira Gandhi and Rajiv Gandhi made "failed" efforts to eliminate poverty and Rahul Gandhi is now going on the same path (with his Nyay scheme).

Nowhere in the world you will see the "karishma" (miracle) of 34 crore bank accounts being opened in such a short time (under Jan Dhan Yojana), he said, adding this could happen only due to Modi''s leadership.

Mr Singh said only five crore people are left in the extremely poor category and added "we will abolish this poverty in the coming five to seven years".

Thane and Palghar are among the 17 Lok Sabha seats that will vote in the fourth and final phase in Maharashtra on April 29.