Rajnath Singh On His Biggest Achievement As Home Minister

Lok Sabha Elections 2019: Rajnath Singh asserts that BJP will come back to power with a thumping majority as people want the good governance of the Narendra Modi dispensation to continue. 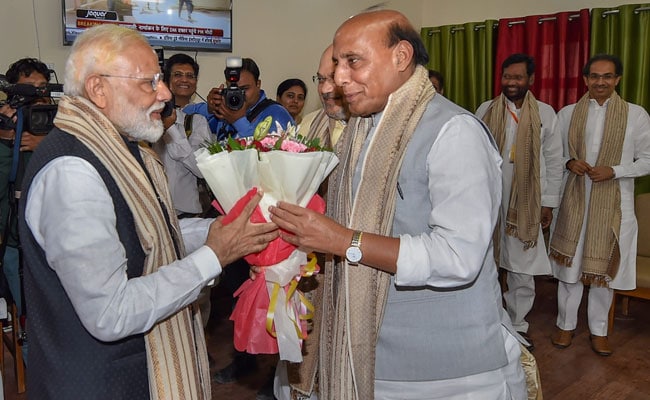 The way Modiji has led India, there is no doubt we will win three-fourth majority, said Rajnath Singh

Curbing insurgency in the Northeast has been his biggest achievement as home minister, according to Rajnath Singh who says Maoist violence in the country is also on the wane.

The Union home minister asserts that BJP will come back to power with a thumping majority as people want the good governance of the Narendra Modi dispensation to continue.

"The way Modiji has led the country at national and international levels in the last five years, there is not an iota of doubt about our win with three-fourths majority in these polls," he claims.

Mr Singh says as home minister, he worked, among other things, towards curbing insurgency in the Northeast and Maoism in parts of the country.

"Insurgency in Northeast is almost finished," he told PTI in an interview.

On Maoism, he says, "We are now in the most favourable position since 1971, when more security personnel used to get killed than Naxals. Now the trend has reversed... Our security forces have been giving a befitting reply and eliminating Naxals."

Earlier Maoists operated in 126 districts, but now their activities are limited to just six-seven districts, he says.

"We are quite sure that in coming days, we will root them out. The elimination of insurgency in the Northeast has been my biggest achievement as home minister...even beyond my expectations," the former chief minister of Uttar Pradesh says.

He also says that as home minister, he made maximum number of visits to Jammu and Kashmir and tried to find a long-term solution to the region's problems, though it could not yield the desired results.

"Now, time has come to review articles 35A and 370 of the Constitution (providing special status and rights to the state and its citizens) and assess what Jammu and Kashmir got and what it lost due to these two provisions," he says.

"My ministry also revoked the registration of 20,000 organisations which used to get money from overseas under the Foreign Contribution (Regulation) Act and were involved in activities which were not in the interest of our country," he says.

Mr Singh, who is contesting Lok Sabha polls from Lucknow, says he does not believe that PM Modi's persona is overshadowing the work of other lawmakers and ministers.

"Whatever ministers or MPs do, they do it after getting the team leader's consent, it is but natural. All policy decisions are taken under the chairmanship of the prime minister. So, saying that the work of other ministers or MPs is overshadowed is not right," he says.

"People are smart enough and politically aware. They have their own parameters to gauge public representatives' records and performances," he adds.

To a query why the BJP's campaign has no mention of the notes ban and GST, Mr Singh, who headed the party's manifesto committee, says they are no longer poll issues.

"Their (positive and expected) results have started surfacing. GST has been simplified several times and we have made it abundantly clear that whenever there is a need, we will come up with more simplifications so that the business class does not suffer," he says.

Asked why the BJP has ''imported'' candidates from outside the party, like Bhojpuri film actors Nirahua and Ravi Kishan, Bollywood star Sunny Deol and Pragya Thakur, he says it shows the party's "inclusive and pluralistic" character.

"Let me clarify that the BJP's core cadre is quite strong and we have no dearth of candidates. But there are some people in every society who have a large fan following and have some intrinsic political acumen.

"When we get these people in our party, they become an integral part of the BJP family and by this way, our party becomes more inclusive and pluralistic," he reasons.

Asked about the BJP fielded only a few Muslim candidates, he says though he was not in a position to tell the exact number, but the party has given tickets to members from the community.

"We are very careful about our core principal - ''Sabka Saath Sabka Vikas''. Unfortunately, the opposition parties are unsuccessfully trying to create a fear factor. But we have built a sense of confidence and I am quite sure that we will get their (Muslims) bigger support this time than what we got in the previous Lok Sabha election," he claims.

Mr Singh says North Indians living in Maharashtra always supported the BJP ever since this party came to existence.

He also dubs the BJP-Shiv Sena alliance as an "unbreakable bond".

"The coming together of two parties with same nationalist ideology is very rare. But this is possible only here in Maharashtra. Though we had some differences, but they have been resolved. The BJP-Shiv Sena have an unbreakable bond and we have proved it," he adds.