Tamil Nadu Should Be Ruled By Its People, Not Nagpur, Says Rahul Gandhi

Election 2019: Rahul Gandhi, addressing an election rally about 260 km from Chennai, said: "Tamil Nadu should be ruled from Tamil Nadu. MK Stalin will be the Chief Minister." 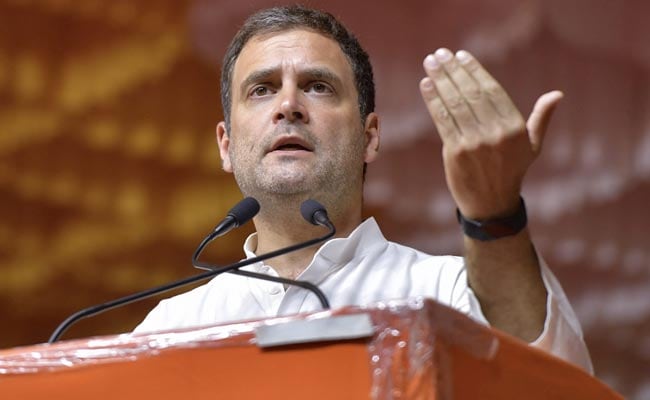 Farmers will not be jailed for non-repayment of bank loans if Congress comes to power, said Rahul Gandhi

Tamil Nadu should be ruled by the people of Tamil Nadu and DMK President MK Stalin will become its next Chief Minister, Congress President Rahul Gandhi declared on Friday.

Addressing an election rally, about 260 km from Chennai, Mr Gandhi said: "Tamil Nadu should be ruled from Tamil Nadu. Stalin will be the Chief Minister."

The opposition parties in Tamil Nadu charge the BJP with remote-controlling the AIADMK government in the state.

According to Mr Gandhi, the state should not be ruled from Nagpur -- where the Rashtriya Swyamsevak Sangh (RSS), the BJP's political mentor, is headquartered.

"We will not let the people of Tamil Nadu to be led by Nagpur," Mr Gandhi said, adding that the DMK-Congress combine will defend the spirit of the Tamil people.

According to Mr Gandhi, when the Congress comes to power at the centre, farmers will not be jailed for non-repayment of bank loans.

"It is not fair that rich businessmen are not jailed for non-repayment of bank loans while poor farmers go to jail for defaulting on bank loans," Mr Gandhi said.

"After 2019, no farmer will be put in jail for non-repayment of loan."

He said the Congress government will tell the farmers in advance the Minimum Support Price (MSP) and other things so that they can plan their crops accordingly.

He alleged that PM Modi can be seen only with rich businessmen and not with poor farmer or small entrepreneurs.

The Congress chief said that Prime Minister Narendra Modi could not find time to speak with the Tamil Nadu farmers who had protested in New Delhi demanding farm loan waiver.

Mr Gandhi said the Congress party has decided to carry out a surgical strike on poverty and promised to identity 20 per cent of the poorest in the country and transfer Rs 72,000 every year into the bank account of women head of the poor family under the proposed Nyay scheme.

"Once the money gets paid into the bank account, poor people will start consuming and the economy will kickstart again."

He said the textile industry in Tiruppur and the silk industry in Kancheepuram will start booming again after being affected by the Goods and Services Tax (GST).

According to him, the Congress, once it comes to power, will fill up the 24 lakh vacant jobs in the government and 10 lakh vacancies in Panchayats.

Mr Gandhi said the Congress will bring in reservation of seats in the Lok Sabha, the Rajya Sabha and state assemblies for women.

"Thirty-three per cent of central government jobs will also be reserved for women," he added.

The Congress is fighting the Lok Sabha elections in Tamil Nadu as part of the DMK-led alliance.

Referring to the opposition to common entrance exam for medical college admissions in Tamil Nadu, Mr Gandhi said in the Congress manifesto there is a line that states NEET (National Eligibility-cum-Entrance Test) will not be imposed.

He said all sections of the society were discussed before coming out with our manifesto.

"It is not man ki baath but our kaam ki baath," he said.