Both Rahul Gandhi and Priyanka Gandhi Vadra likened their quest to defeat PM Narendra Modi to the country's pre-independence struggle against British rule. 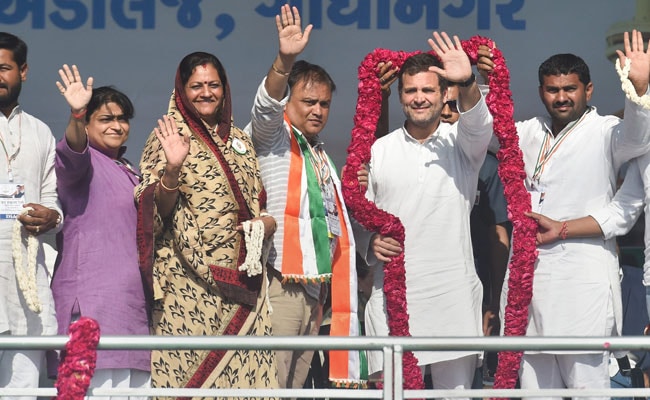 With a massive rally in Prime Minister Narendra Modi's home state, Congress chief Rahul Gandhi on Tuesday launched a blistering attack over economic and social issues such as jobs and promise of rooting out corruption. Calling unemployment the most important issue in the general election, which starts on April 11, Rahul Gandhi also reminded PM Modi of his "promise" to deposit Rs 15 lakh in bank accounts of every citizen.

He was speaking at a rally in Adalaj village of Gandhinagar district, held after the Congress Working Committee meeting.

Mr Gandhi played to the gallery in the business-driven state by claiming that "Gabbar Singh Tax", his oft-repeated jibe for the Goods and Services Tax (GST) was beyond the understanding of traders. Thousands of party supporters clapped and cheered him and his sister Priyanka Gandhi Vadra, who delivered her first political speech since being given a party role.

"Gabbar Singh Tax (GST) can't be understood by our traders even today (after it was implemented nationwide last year)," he said.

Both Rahul Gandhi and Priyanka Gandhi Vadra likened their quest to defeat PM Modi to the country's pre-independence struggle against British rule.

Opposition parties say PM Modi's flagship policies - including new taxes and the cancellation of huge numbers of banknotes - have not produced promised jobs, while India's farmers are up in arms over massive debt burdens.

But political commentators say the BJP has gained ground after India launched retaliatory air strikes on Pakistan last month in response to a suicide bombing that killed 40 Indian paramilitary troops in Jammu and Kashmir's Pulwama.

The Congress has sought to deflate the BJP's advantage over the clash with Pakistan, questioning the politicisation of the armed forces.

On Tuesday, Mr Gandhi said it was National Security Adviser Ajit Doval who has sent Massod Azhar, chief of the terror group Jaish-e-Mohammed that claimed the Pulwama attack, to freedom in a "special plane".

"Masood Azhar was sent in a special aircraft and NSA Ajit Doval accompanied him," Mr Gandhi answered his query for the crowd.

In the next month's Lok Sabha polls, truth will win and hatred will be defeated, Mr Gandhi said.