The Congress on Sunday said it would not contest seven Lok Sabha seats in Uttar Pradesh either held or being contested by big leaders of the BSP-Samajwadi Party combine. 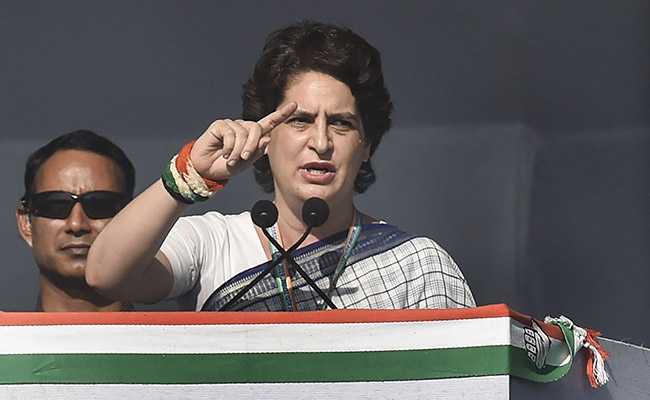 As Mayawati and Akhilesh Yadav both snubbed the Congress for its "offer" to set aside seven Uttar Pradesh seats for their alliance in next month's national election, Priyanka Gandhi Vadra reminded that their common goal was to defeat the BJP.

Asked to comment on the caustic response of Mayawati, the chief of the Bahujan Samaj Party (BSP), and Samajwadi Party leader Akhilesh Yadav, Priyanka Gandhi said: "We don't want to disturb anybody, we have no problems with anyone. Our goal is to defeat BJP... that is their goal too."

The Congress on Sunday said it would not contest seven Lok Sabha seats in Uttar Pradesh either held or being contested by big leaders of the BSP-Samajwadi Party combine.

When Mayawati and Akhilesh Yadav had announced their tie-up in January - leaving the Congress out of their anti-BJP gathbandhan - they had said that they would spare for the Congress its lone two seats, Amethi represented by Congress chief Rahul Gandhi and Raebareli held by his mother Sonia Gandhi.

The Congress yesterday "returned" the favour, adding more seats. The move signaled that the party hasn't given up on an understanding with the Samajwadi-BSP gathbandhan despite repeated snubs.

But Mayawati seized the chance to stress that her party would not have any understanding or alliance with the Congress not just in UP but anywhere in the country.

"The Congress should not create confusion by forcibly trying to leave seven seats for the gathbandhan," Mayawati said in tweets.

"Congress is free to contest all 80 seats of UP, meaning our alliance is perfectly capable of defeating the BJP on its own," said the BSP chief.

Her ally and Samajwadi Party chief Akhilesh Yadav echoed her: "The SP-BSP-RLD alliance in Uttar Pradesh is capable of defeating the BJP. The Congress shouldn't create confusion."

The Congress says it will skip seats like Mainpuri, from where Samajwadi Party patriarch Mulayam Singh Yadav is contesting and Kannauj, where his daughter-in-law Dimple Yadav is expected to run, says senior Congress leader Raj Babbar. The Congress will also skip the seats of Rashtriya Lok Dal's Ajit Singh and Jayant Chaudhary and Mayawati. It also plans to give Gonda and Pilibhit to Apna Dal.

Mayawati has minced no words in rejecting the offer, but these nine seats may be the only ones that won't see three-cornered contests featuring the BJP, Congress and SP-BSP duo.

The opposition is worried that multi-cornered contests will only divide opposition votes and help the BJP, which won a whopping 71 seats in the 2014 election.

UP will vote in all seven rounds of the April-May national election.