What Candidates Must Learn From Sonia Gandhi: Daughter Priyanka Tweets

Sonia Gandhi is fighting for a fourth straight term from Raebareli, which has voted her since 2004. 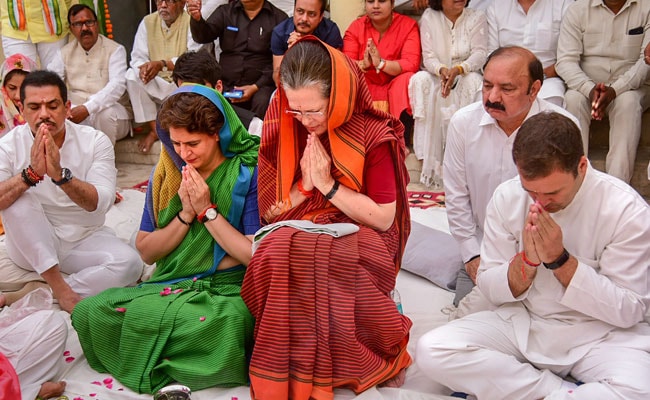 "Every candidate, every politician should learn from my mother's devotion to the people of Raebareli. Politics is about public services and dedication. Whoever gets this opportunity should be thankful to the people," she tweeted in Hindi along with a photo of Sonia Gandhi filing her papers.

Sonia Gandhi is fighting for a fourth straight term from Raebareli, which has voted her since 2004, when she vacated Amethi for son Rahul's debut election. Before filing her nomination, she sat for an elaborate puja with her children Rahul and Priyanka, and later took out a roadshow.

Prime Minister Narendra Modi is not invincible, Sonia Gandhi told reporters after filing her papers. "Don't forget 2004," she said, reminding the media of her party Congress taking power despite widespread predictions of a BJP victory.

Atal Bihari Vajpayee, who led a BJP government in 1996, 1998 and 1999, suffered a shock defeat in 2004, despite predictions that he would win another term riding on an "India Shining" campaign.

Sonia Gandhi, who was Congress president at the time, turned down her party leaders' appeals to take office - amid strong protests by the BJP and other parties over a foreign-born Prime Minister - and named Dr Manmohan Singh for the top job.

This time in Raebareli, she is contesting against Dinesh Pratap Singh, who recently joined the BJP after leaving the Congress. The Samajwadi Party (SP) and the Bahujan Samaj Party (BSP) have not fielded a candidate in the Congress bastion.

Raebareli will vote in the fifth-phase of the Lok Sabha polls on May 6. Results will be declared on May 23.