This will be PM Modi's first rally in Chhattisgarh after the Lok Sabha election dates were announced last month. 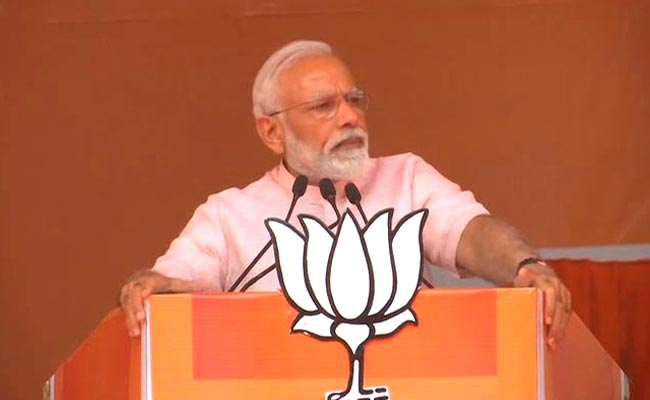 PM Modi will arrive at Balod from Sonepur town in Odisha

Prime Minister Narendra Modi will address an election rally in Balod district of Chhattisgarh on Saturday.

This will be PM Modi's first rally in Chhattisgarh after the Lok Sabha election dates were announced last month.

"The PM will address a public meeting in Hathaud village near Balod district headquarters around 2 pm on Saturday," a BJP state spokesperson here said.

PM Modi will arrive at Balod from Sonepur town in Odisha, he added.

Preparation for the programme has been done and it will be attended by people from four Lok Sabha constituencies- Kanker (ST), Durg, Mahasamund and Rajnandgaon, the BJP leader said.

BJP's candidates on these seats Mohan Mandavi (Kanker), Chunnilal Sahu (Mahasamund), Santosh Pandey (Rajnandgaon) and Vijay Baghel (Durg) will be present on the occasion, he added.

After the rally, PM Modi will reach Raipur, from where he will leave for Maharashtra, he added.

Balod district falls in Kanker Lok Sabha constituency, which will witness polling along with two other seats- Rajnandgaon and Mahasamund in the second phase.

Naxal-affected Bastar (ST) seat is the only constituency in Chhattisgarh, where polls will be held in the first phase.

During the previous three Lok Sabha polls, the BJP was in power in Chhattisgarh. However, this time, the Congress is ruling the state.

The Congress, which had won 68 seats in the 90-member assembly in the last year's state election, has posed a huge challenge before the BJP to retain its previous performances.

The PM's rally holds significance as the BJP is mainly banking on Modi factor and development work done by the Centre to garner votes.