Lok Sabha elections 2019: "I am confident that every single vote from our gathbandhan, under any condition, will go to the two Congress leaders (from Amethi and Raebareli)," Mayawati said

General elections 2019: Mayawati said Congress will get every alliance vote in Amethi and Raebareli

Mayawati today countered Prime Minister Narendra Modi's remark that Congress and the Samajwadi Party were using her, with a strong message of unity. The Congress, which had been kept out of the Uttar Pradesh alliance, mainly because of her reservations, will get every alliance vote in Amethi and Raebareli, she said. The alliance is not contesting the two Congress strongholds - now with Congress chief Rahul Gandhi and his mother and UPA chairperson Sonia Gandhi - which go to polls on May 6.

"I am confident that every single vote from our gathbandhan, under any condition, will go to the two Congress leaders (from Amethi and Raebareli)," Mayawati was quoted as saying by news agency ANI.

Days after Congress's Priyanka Gandhi Vadra, in a very unusual move, met the Samajwadi Party workers in Raebareli on Thursday, Prime Minister Modi had said Akhilesh Yadav was colluding with the Congress behind Mayawati's back. Alleging that SP and the BSP would be at each other's throats after the election results come out, PM Modi said, "The SP is going soft on the Congress, but its alliance partner BSP chief Mayawati is attacking the Congress... Congress leaders are happily sharing the stage with Samajwadi Party in rallies. These people have betrayed Behenji so cunningly that she cannot even see through the games."

PM Modi, who had time and again accused several opposition leaders of vying for the top post, said, "It was said you (Mayawati) will be made the prime minister, but now Behenji has understood that the SP and the Congress are playing a big game with her". 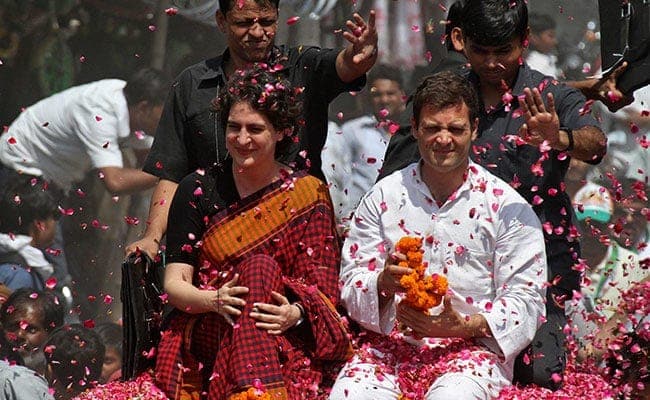 The alliance is not contesting the two Congress strongholds - now with Congress chief Rahul Gandhi and his mother and UPA chairperson Sonia Gandhi - which go to polls on May 6.

Over the last week, Mayawati had been furious with the Congress after a candidate from her party had changed camp in Madhya Pradesh. She had even threatened that she would pull out support from the Kamal Nath government, which has a wafer-thin majority, and accused the Congress of being hand-in-glove with the BJP.

But her today's statement marked a significant turnaround. "He (PM Modi) tried everything in his might to destroy the mahagathbandhan. In keeping with his phoot daalo, raj karo (divide and rule) strategy, he said several erroneous things at his election rally in Pratapgarh yesterday. He wants the SP-BSP-RLD to fight with each other," Mayawati said today.

The alliance between Akhilesh Yadav and Mayawati in the politically crucial Uttar Pradesh - which sends the largest number of lawmakers to parliament - is seen as a challenge to the BJP, which won 71 of the state's 80 Lok Sabha seats in 2014.

The Congress's solo entry in the game - after being denied entry in the alliance team - is seen to lessen the chances of the gathbandhan by splitting the anti-BJP vote.

Yesterday, Priyanka Gandhi Vadra had addressed a meeting of Samajwadi workers in Raebareli, from where Sonia Gandhi is seeking re-election. Akhilesh Yadav once said Priyanka Gandhi's entry into politics in 2014 would have changed the scenario in the state. Earlier, he had mocked the Congress, saying they are part of the alliance since they have been given the two seats.

Today, SP Chief Akhilesh Yadav also reacted to the prime minister's speech, saying, "Modi's language has changed because BJP is lagging behind in previous phases of elections. BJP can see no other way. They're not talking about development, farmers' income. PM just wants to mislead people. SP-BSP-RLD will decide who will form the government and be the PM".