Election 2019: So far, only two Chief Ministers - Delhi's Arvind Kejriwal and Andhra Pradesh's N Chandrababu Naidu - are expected to be at the sit-in protest at Jantar Mantar, Delhi's designated venue for protests.

Three weeks after her Mahagathbandhan mega rally in Kolkata, West Bengal Chief Minister Mamata Banerjee is in New Delhi to take forward efforts to form a "United India Opposition" and a rally to save the Constitution and democracy. The sit-in she will join at Jantar Mantar is being loosely labelled "Mahagathbandhan 2.0". Delhi Chief Minister Arvind Kejriwal is playing to this round of opposition muscle-flexing.

"Narendra Modi knows he is not coming to power. His expiry date is over. Within 15 days, we will have election dates. We want to see a new government, the country wants a change, the country wants to see a united India, where democracy and inclusiveness will be sustained," Ms Banerjee said in Kolkata before leaving for New Delhi.

While no names of leaders expected to attend are being shared, almost all the 20-odd political parties who shared stage in Kolkata on January 19 are expected to gather at Jantar Mantar.

HD Deve Gowda, former prime minister, is in New Delhi; so is NCP chief Sharad Pawar, his party colleague Praful Patel, DMK's Kanimozhi and National Conference leaders. RJD leader Tejashwi Yadav is unwell; he did not attend the assembly in Patna over the last two days.

There is uncertainty over the Congress's attendanc. While Abhishek Manu Singhvi and Mallikarjun Kharge had represented the party at the January 19 rally in Kolkata, the fact that the Delhi platform is being hosted by Mr Kejriwal is a sticky point.

"But someone from Congress will be there," said sources who are working behind the scenes of "Mahagathbandhan 2.0".

The turnout is expected to be high. Wednesday is the last day of parliament. "Once the MPs finish, they will stream to Jantar Mantar. They will be provided logistic support," sources said. 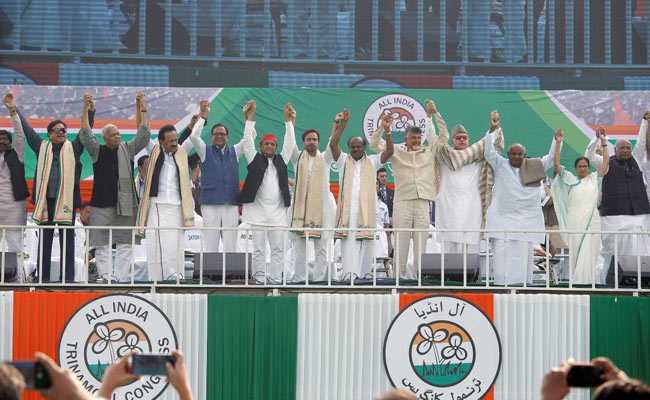 Plans for the opposition dharna had been indicated by Mamata Banerjee when she called off her sit-in protest in Kolkata earlier this month.

That sit-in was over the showdown between the Kolkata police and the Central Bureau of Investigation and Ms Banerjee had said the Opposition would soon take up the issue of the attack on institutions in Delhi.

It was a joint decision, taken after discussion with several opposition leaders who met in New Delhi. Chandrababu Naidu was on the dais with Ms Banerjee when she announced "Mahagathbandhan 2.0".