Efforts Being Made To Create "Inhuman Religion" In India: Mamata Banerjee

Lok Sabha Elections 2019: Mamata Banerjee, without directly naming it, accused the party of trying to impose its choice of food, clothing and religion on the people and then deciding who would stay in the country and who would be thrown out. 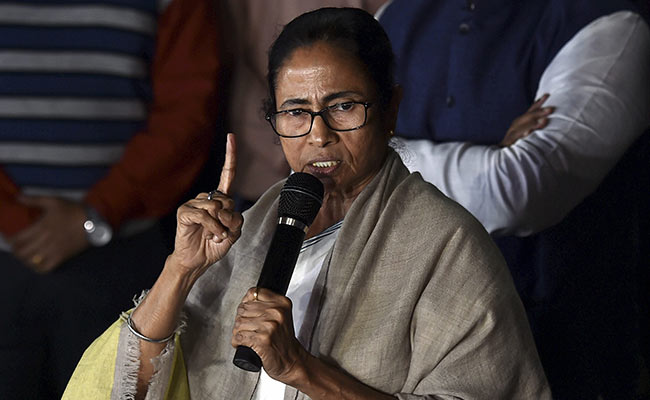 In an apparent attack on the BJP, West Bengal Chief Minister Mamata Banerjee Thursday alleged that efforts were on to introduce an "inhuman" religion in the country on the basis of divisive politics.

Ms Banerjee, without directly naming it, accused the party of trying to impose its choice of food, clothing and religion on the people and then deciding who would stay in the country and who would be thrown out.

"If some people are trying to implement one law as per their will, we will not let them do so. We don't support this theory of divisive politics...," she said.

Ms Banerjee urged people not to pay heed to provocations meant to create differences among them and stay united.

"United India is what we want. Let's think and speak about unity.... There must not be any divide and rule policy," she said.

Ms Banerjee, also the Trinamool Congress chief, said she does not believe in the politics of dividing people on the basis of their religion, caste and creed.

The chief minister also criticised the threats that a Kashmiri medical practitioner in Kolkata received following the Pulwama terror attack.

"We cannot ask a Kashmiri shawl trader to leave because an incident had happened. How audacious they are to order one doctor who is practising here for more than 20 years to leave for one single incident," she said.

She asked people to use their mother tongue to protest the move to divide the country.

Earlier in the day, Ms Banerjee urged people to respect all languages, but take pride in their mother tongue.

"Best wishes to all on International Mother Language Day. Respect all languages but take pride in your mother tongue," she tweeted.

International Mother Language Day is observed around the world on February 21 to promote awareness on linguistic and cultural diversity.