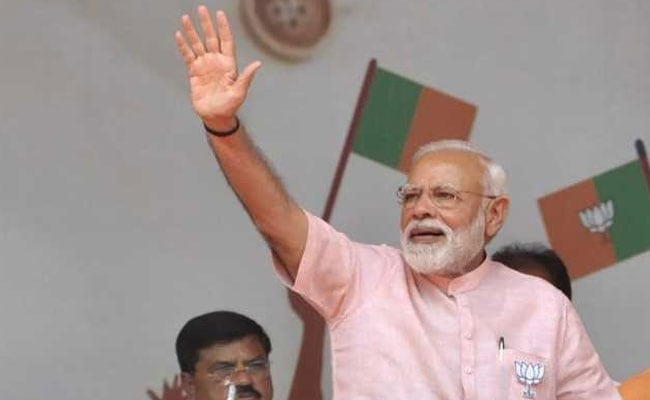 A "mahamilawat" (adulterated) government in the centre cannot protect the people of this country, Prime Minister Narendra Modi said today at a rally in Uttar Pradesh's Saharanpur, as he took a dig at the opposition days before the national elections that begin on April 11.

PM Modi said for the BJP, the Lok Sabha elections is not about choosing a Prime Minister but to develop the country, alluding to the BJP's oft-repeated criticism of every senior "grand alliance" leader who the party says was angling to become the next PM.

"The opposition's only agenda is Modi hatao (remove Modi). Their only intention is to promote vansvaad (dynastic politics)," PM Modi said as the audience cheered "Modi! Modi!" in the blazing sun.

"But remember, when there was mahamilawat, the government at the centre and then SP (Samajwadi Party) government in Uttar Pradesh did an experiment in Muzaffarnagar also," PM Modi said, referring to the violence in the western Uttar Pradesh town in 2013 that killed 66 and displaced over 50,000 people.

He was addressing the rally around the same time as Samajwadi Party chief Akhilesh Yadav was releasing a 16-page "vision document" of his party in Lucknow.

PM Modi said after Kairna, Muzaffarnagar and the entire western Uttar Pradesh, Shaharnpur was the opposition's "new laboratory". "They (opposition) give threat of boti-boti (cut into pieces) and we talk of honour of beti-beti (daughter)," he said.

Saharanpur will vote on April 11.

The Prime Minister alleged the Congress was against the welfare of backward communities, adding former prime minister Rajiv Gandhi was against the Mandal commission recommendations.

"When I washed the feet of cleaners at the Kumbh Mela in Prayagraj, behenji (Mayawati) had all the time to make fun of me, but when the Congress humiliated the cleaners, she did not even release a statement," PM Modi added.