Jaya Prada Breaks Down At Rampur Rally, Says Driven Out By Azam Khan

Jaya Prada won from Rampur in 2004 and 2009 as a Samajwadi Party candidate. In 2014, she contested as a Rashtriya Lok Dal candidate from Rajasthan's Bijnor and lost. 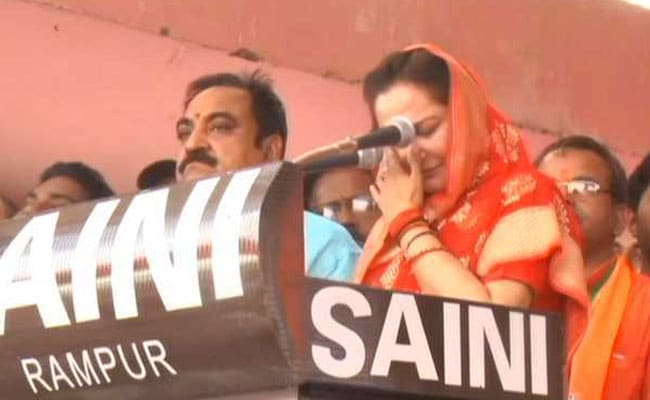 Actor-turned-politician Jaya Prada broke down at a public rally in Uttar Pradesh's Rampur, where she launched her campaign today as a BJP candidate. Alleging that she had been forced to leave Rampur, her former constituency, because of attacks by Samajwadi Party leader Azam Khan, she paused and wiped her tears as BJP supporters shouted "Jaya Prada ji sangharsh karo, hum aapke saath hai (we are with you in your fight)."

In a crimson-and-gold sari, her head covered, Jaya Prada addressed the rally after filing her nomination papers to contest the April-May national election. Marking her 67th birthday, she thanked the BJP for a "special birthday gift" - the chance to contest as the party's candidate from a place she was deeply attached to.

Jaya Prada won from Rampur in 2004 and 2009 as a Samajwadi Party candidate. In 2014, she contested as a Rashtriya Lok Dal candidate from UP's Bijnor and lost.

This time, she faces the Samajwadi Party's Azam Khan, a colleague-turned-bitter rival who reduced her to tears more than once. In 2004, Azam Khan campaigned for her but the circumstances changed drastically by the next election, when she got caught in factionalism and was identified more with the Amar Singh camp.

"I left Rampur and active politics because they tried to attack me with acid," she said.

Composing herself, she continued: "For the first time, I have the strength of the BJP behind me. I don't want to cry like before. I have the right to live, and I will, to serve you." She added that she felt "proud" to be in a party where women were protected and respected.

Jaya Prada stopped at a temple before going to the election office to file her papers.

"I prayed to God that I win this battle and once again I get a chance to serve the people," said the veteran actress.