In UP, BJP's Dalit Outreach May Have Run Into A New Wall: Stray Cattle

Dalits account for nearly 20 per cent of Uttar Pradesh's population, but are not a monolith. About half are Jatavs, believed to be loyal to the Dalit-focused Bahujan Samaj Party or BSP.

"We voted for the BJP in 2014, but not this time," farmers in Kanar village said.

An hour outside Lucknow, in the village of Kanar, in Malihabad, farmers take us to their mango orchards.

The trees are just beginning to bear fruit; in the next two months, the famed Dussehri, Safeda and Chausa mangoes from here will make their way all over India.

But we are not here to see the fruit; instead we are pointed to a serrated wire that runs around the orchard, meant to keep out stray cattle.

The bovines, we are told, have created chaos this season, invading the orchards and chewing at low-lying branches and leaves, where the fruit takes bud.

The scene in the orchard resembles phenomenon that has resonated across the Hindi heartland, where new, tougher cow protection laws by BJP government's as well as violent attacks by Hindutva-linked cattle vigilante outfits have disrupted the sale and disposal of infirm cattle, creating a potential political time-bomb for the BJP.

"We voted for the BJP in 2014, but not this time", farmers in Kanar village said.

The men are mainly from the Pasi community, a prominent Dalit sub-caste.

Dalits account for nearly 20 per cent of Uttar Pradesh's population, but are not a monolith. About half are Jatavs, believed to be loyal to the Dalit-focused Bahujan Samaj Party or BSP.

The remaining 10 per cent, divided into numerous sub-castes like Pasis, Valmikis and so on are politically more mobile, increasingly wooed by the BJP. 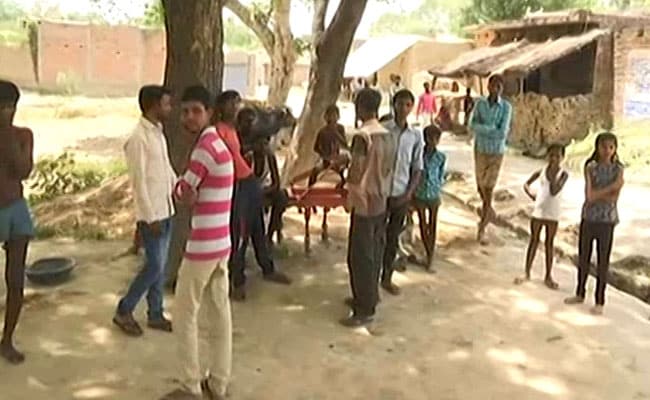 The men are mainly from the Pasi community, a prominent Dalit sub-caste.

The courtship has paid off so far: In the 2014 Lok Sabha polls, the BJP won all 17 of UP's SC seats (seats reserved for the Scheduled Castes), including Mohanlalganj, in which Malihabad falls. In 2009, it had won just two.

In the 2017 assembly elections, the party won two out of the three reserved seats that fall in the Mohanlalganj Lok Sabha seat, including Malihabad. (Overall, the BJP won 68 of the state's 84 reserved seats).

This time, the opposition BSP-Samajwadi Party alliance has fielded 10 Jatavs and six non-Jatavs while the BJP has fielded only two Jatavs and 14 non-Jatavs, according to data analysed by the Trivedi Centre for Political Data in Delhi's Ashoka University.

UP's main opposition - a coalition between the Samajwadi Party and the BSP-  has described the BJP's Dalit outreach as posturing, calling the saffron party 'anti-Dalit' and pointing to a rise in atrocities against lower castes under the Modi government.

But the Dalits (mainly Pasis) that voted for the BJP, and whom we spoke to, did not blame their disquiet on an assault on their identity. Instead, they said it stemmed more pressing concerns, like stray cattle and joblessness.

Vinit Gautam, a 30-year-old from Kanar village told us that he had voted for the BJP in 2014 because of the promise of two crore jobs. "Where has that gone now," he asked.

He said he will be voting for the Mahagathbandan, the name given to the BSP-Samajwadi alliance.

A woman, Chandravati, 36, said she had voted for PM Modi in the hope of a better life.

"We have got nothing. Others have got toilets in their house (under the Centre's Swacch Bharat Scheme), but not us," she said.

She also claimed some in the village got Rs 2,000 under the PM-KISAN farm income scheme, but not her. "We have been fooled," she said, breaking down.

An hour east of Malihabad, in Sidhauli, another Dalit dominated area, we hear similar grievances in Khale Gadhi village, a hamlet of Jatav and non-Jatav Dalits.

Sunil Kumar, 25, from the Pasi community says he works in a 'private job' and also does farming.

He would not reveal his voting choices, but says "society looks for development and security. BJP supporters think they have done a good job but farmers are distressed."

Malti, 34, said she voted for the BJP last time. "But Modi has done nothing for us. I had to sell soil from my farm land to pay off my debts", she said.

In the neighbouring village of Barbatpur, however, we come across a group of Pasis that voted for the BJP in 2014, and intend to do so again.

Srikrishna, a farmer, 50, said, "Whatever the BJP is doing is good. They are thinking of development".

"Animals do enter our fields. For this, the BJP is building more gaushalas (cow shelters)", he said.

Another farmer, Munne Lal, said he admired the BJP government for conducting surgical strikes against Pakistan.

Meena Devi, 36, said her name was cut from the ration card. She has also not got the benefits of the PM-KISAN scheme, but will "still vote for Modi."

When asked why, she said, "Everybody in the village is supporting him, and so will I."