Computer Baba, originally Namdas Tyagi, had been appointed last April by previous chief minister Shivraj Singh Chouhan as one of the five ministers in charge of a project linked to the river Narmada

In a giant yellow marquee in the heart of Madhya Pradesh Bhopal, thousands of sadhus practicing "Hath Yoga" are served food. Led by "Computer Baba", the self-styled godman and a minister in the previous BJP government in Madhya Pradesh, the sadhus are praying for votes for Congress candidate Digvijaya Singh. As he faces the BJP's Pragya Thakur, a saffron-robed "Sadhvi", the Congress veteran also turned to a large group of Sadhus.

Computer Baba, originally Namdas Tyagi, had been appointed last April by previous chief minister Shivraj Singh Chouhan as one of the five ministers in charge of a project linked to the river Narmada. Six months later, he quit and was seen flirting with the Congress. By December he was campaigning openly for the party. 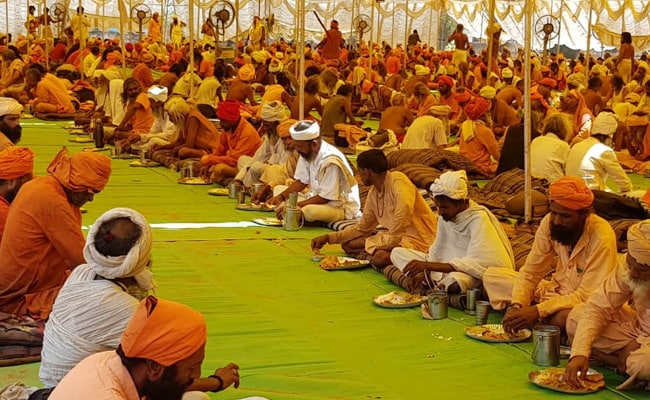 Computer Baba and many other Sadhus are participating in a Yagna.

"These Sadhus are not for Congress but against BJP. Everyone refused to contest against Digvijaya Singh so the BJP found a sacrificial lamb in Pragya," Computer Baba said, chanting the slogan "Ram Naam Abki Baar, Badal Ke Rakh do Chowkidar (change thewatchman).

Computer Baba and several other sadhus are participating in the Maha Yagna organised in Bhopal on Tuesday.

"The BJP has fooled not just the public but the community of seers as well. All sadhus who are with me unanimously say that without a Ram Mandir there will not be a (Prime Minister Narendra) Modi government again. We are holding the Yagna to ensure Digvijay Singh's win," Computer Baba said.

At the ''puja'', Digvijaya Singh is seen dressed in white kurta pyjama and seated on the ground while the sadhus surround him in a semi-circle.

Not all the "Babas" really know what they are doing there. ""We are going as we thought it's just a religious function by Computer Baba,  we have nothing to do with politics," said one of the sadhus.

Bhopal will vote in the sixth phase of the parliamentary elections on May 12. The votes will be counted May 23.